During the winter holiday season, France’s Alsace region springs to life as markets pop up across city centers and locals drape twinkling lights to brighten the streets for outdoor activities at night. This region in northeastern France, bordering Germany, is a year-round destination for food, wine, architecture, and art, yet there’s something extra special about Alsace during Christmastime.

Each town in the Alsace region looks like it could be straight out of a fairytale. Narrow streets are lined with picturesque and multicolored half-timbered houses with steep roofs (think alpine village houses, but in brighter colors). It’s in these streets and city squares that local craftspeople, bakers, vintners, and sellers set up stalls and take part in the widespread tradition of Christmas markets. Thousands attend these markets, both locals and tourists from all over the world. While wandering through the Christmas markets of Alsace, you’ll be able to see the interesting mixture of French and German culture that runs throughout the region, giving it a one-of-a-kind feel.

Alsace may even be the most festive place to visit during the Christmas season. A bold claim, we know, but we have more than a few reasons why. Alsace is widely accepted as the birthplace of the decorated Christmas tree tradition, and it’s in Alsace that many other popular holiday rituals have originated. From mulled wine and Christmas markets, to parades featuring a cast of Christmas characters, Alsace knows how to keep busy during December. Read on to learn more about the festive traditions of this unique region, and discover what our favorite Christmas markets of Alsace have to offer. 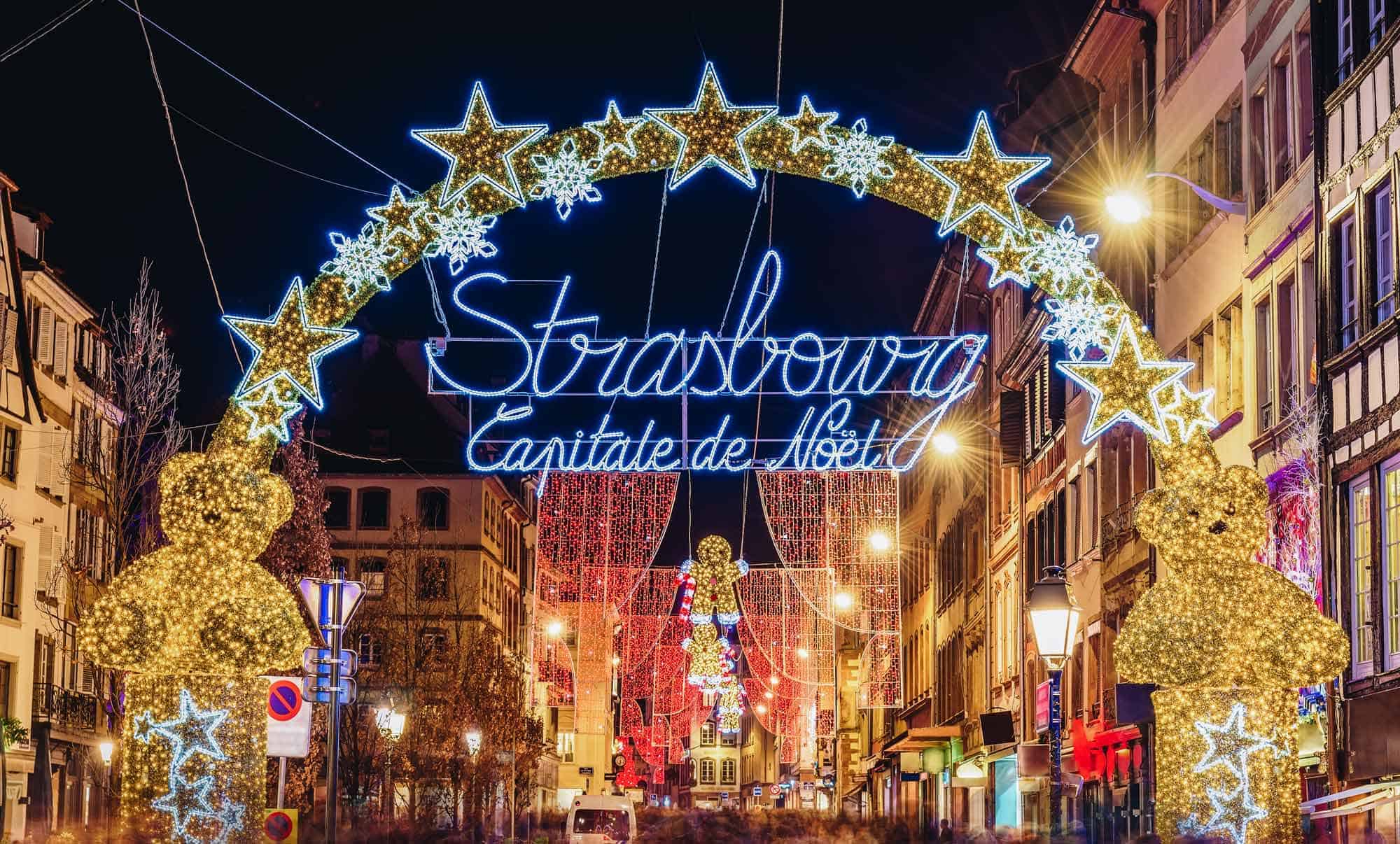 With markets in Strasbourg, Mulhouse, and every village in between, the Christmas markets of Alsace span the entire region.

Alsace celebrates Christmas with detail-oriented intention — so much so that its tourism board has even separated the region into seven Christmas-themed territories, each with its own special focus. These territories are known as Pays de Noël d’Alsace, or The Lands of Alsatian Christmas.

In the Land of Christmas Lights, or Le Pays des Lumières de Noël, Christmas celebrations focus on the many characters that are a part of Alsatian tradition. Rivaling Saint-Nicholas, Christkindel is another famous Christmas figure. Meaning “Christ Child,” Christkindel is an angel appearing as a young woman dressed in white with a crown made of fir. She is famous for being a symbol of light and has become a part of Alsatian tradition by way of the German influence in this region.

In the Land of Christmas Flavors, or Le Pays des Saveurs de Noël, visitors will come across the oldest Christmas Market: Christkindelsmärik. This market in Strasbourg goes back to 1570 and has a reputation for serving up delicious treats. (Keep an eye out for an upcoming Experi story focusing specifically on Christkindelsmärik.)

The Land of Christmas Trees, or Le Pays du Sapin de Noël, includes the city of Sélestat, which has a huge claim to fame. Sélestat is believed to be the city where Christmas trees were first decorated, or at the very least, it’s in this city where decorated trees were first mentioned in writing, back in 1521. During this time period, locals would cut their trees down on December 21 and ornament them with apples, cupcakes, and other sweets.

In the Land of Christmas Carols and Textiles, or Le Pays des Chants et des Étoffes de Noël, the city of Mulhouse is celebrated. Mulhouse’s history is closely tied with the textile industry and this is honored during Christmastime. Each year, one local designer creates that year’s Christmas fabric. 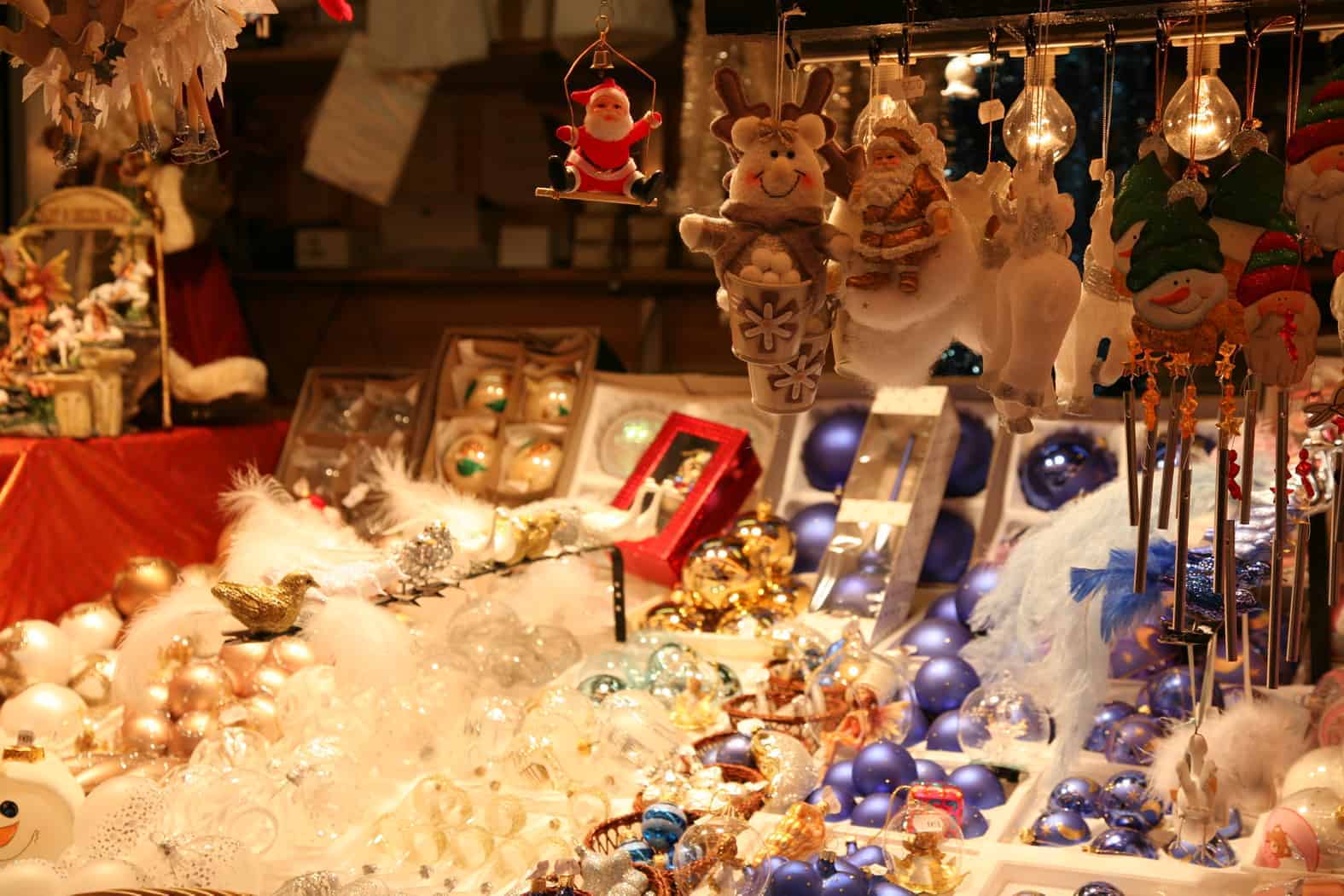 A window display at a Christmas market in Strasbourg showcases ornaments and other festive holiday decor.

Any authentic Alsatian experience requires a visit to the Christmas markets — the more, the better. It would also be pretty tricky to avoid them, as these markets appear all over Alsace starting at the end of November. The most famous of all and the oldest is Christkindelsmärik in Strasbourg, featuring hundreds of seller chalets. Strasbourg has more than just Christkindelsmärik though. In fact, dozens more can be found throughout the city and in the historic city center island called Grande Île. All of these markets feature wooden stalls or chalets where sellers offer up a variety of handmade toys, tree ornaments, breads, beer, wine, pastries and more. Market-goers will find Christmas lights, festive decorations, decorated trees, nativity scenes featuring central Christmas trees (an Alsatian tradition) everywhere they look, and hear classical concerts and carolers, as well.

But it’s not just Strasbourg that knows how to put on wonderful Christmas markets. Other famous Christmas markets of Alsace include those in Sélestat, Colmar, Eguisheim, Kaysersberg, Mulhouse, and Riquewihr. In these markets, you’ll find even more crafts and bites, as well as famous Alsatian wines to try like Riesling and Gewürztraminer. These markets generally open on the first weekend of the Advent, which is four Sundays before Christmas. Other events are tied to the markets, including street illuminations, night parades, performances, and midnight mass. 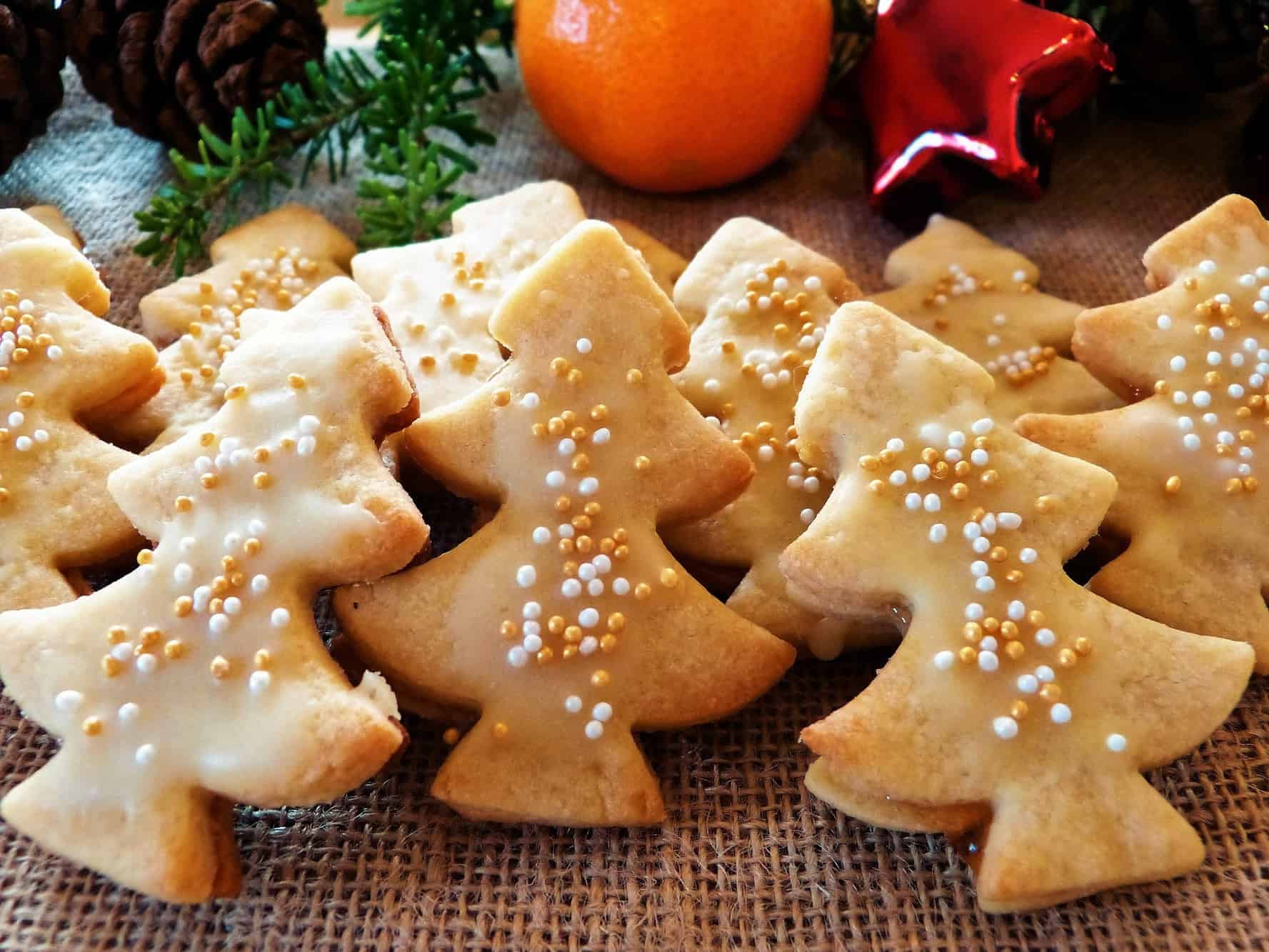 Popular during the Christmas season, bredele is a traditional Alsatian cookie that comes a variety of flavors and shapes, and is widely available at the Christmas markets of Alsace.

It’s easy to get distracted by the music, lights, celebratory crowds, and parades that are all common features of Alsatian Christmas markets — but don’t forget the food! Many of the chalets at Alsatian Christmas markets are food and drink vendors, offering up a variety of seasonal flavors. While setting off on a tasting tour in one of these markets, don’t forget to pace yourself because you’re going to want to experience all sorts of speciality drinks, savory treats, and sweets. Here are a few of our favorites you’re sure to find at most markets.

Also known as bière de Noël, Alsatian Christmas beer is a powerful and malty amber ale historically brewed by monks. It can be spicy, as it’s often flavored with coriander, as well as orange peels.

There are a couple ways to spell this sweet treat and a couple variations on it as well, probably because it is beloved throughout Central Europe, including Alsace, Germany, Austria, Switzerland, Poland, Slovakia, and other countries. Traditionally, Kouglof is a yeast-based cake made in a Bundt mold, and it can have raisins and almonds. In Alsace, it is frequently made to enjoy on Christmas morning.

The Alsatian answer to Christmas cookies are Bredele (also Bredela, Bredle, or Winachtsbredele). Bredele are small cookies or cakes that are baked during Christmastime and are flavored with a variety of festive spices like cinnamon, ginger, cardamom, nutmeg, and cloves.

Each type of Bredele has its own name, typically taken from its special ingredient or shape. Butterbredele are iced with a lemon glaze, Leckerli are diamond-shaped, Anisbredle are flavored with aniseed, Spritzbredele are shortbread cookies flavored with lemon zest, and Lebkuchen are spiced cakes shaped like fingers. There are many more kinds including Schwoewebredele, Zimtsterne, Makrone, Anisschnitte, and Springerle. It’s a long-standing tradition in Alsace for each family to make their own favorite kind of Bredele and exchange them with other friends and families.

Manala are little brioche buns made in the shape of a man, specifically representing Saint-Nicolas. They are sometimes filled with raisins or chocolate, dipped in chocolate, or eaten while drinking hot chocolate. In the Alsace region, it’s tradition to enjoy these sweet breads on Saint-Nicolas Day (December 6).