Stephen Gillanders is the Executive Chef and Partner at Intro in Chicago, known for its upscale à la carte cuisine. Gillanders started his culinary career young, going into training at the age of fifteen in his hometown of Los Angeles. After receiving his advanced degree in Culinary Arts Management at the University of Nevada, Gillanders went on to win the prestigious title of San Pellegrino’s ‘Almost Famous’ Chef competition, leading him to work with revered Chef Jean-Georges Vongerichten. Gillanders continued in a variety of roles, eventually guiding him to Executive Chef and Partner of Intro. Within the LEYE collection of upscale restaurants, Intro is unique. Visiting chefs and emerging culinary talent frequent their kitchen to collaborate directly with Chef Gillanders, bringing innovation and fresh influences to Intro.

Among this whirlwind of success, Gillanders has remained an avid traveler and food-seeker. We chatted with him about his recent food journeys through South Korea and his longer trip through Southeast Asia. It was a joy to hear a spirited Gillanders describe how his travels have thoroughly influenced his cooking philosophy. Read on to hear more about this eloquent and passionate advocate for flavor.

You were just in South Korea a couple weeks ago. Yeah, I was there for about eight days.

What parts would you say are not-to-be-missed? If you wanted to spend a lion’s share or even the entire time of your trip in Seoul, it would be a good move from a food point. Anything you could possibly want to do in a week in Korea, well, Seoul could feed most cravings you might have for it. 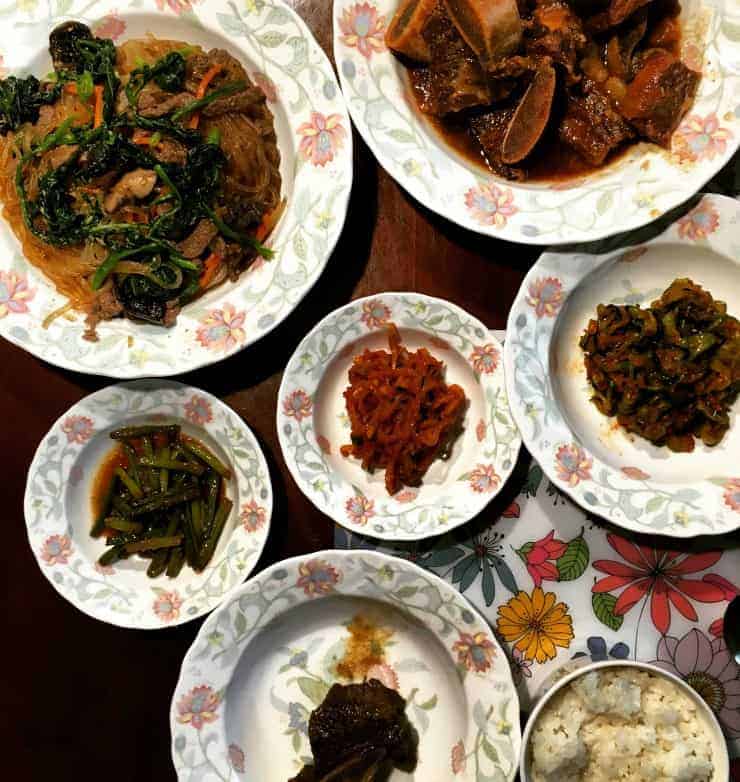 While in Korea, were there any surprising food trends that you came across? A food trend I’m starting to see a lot is American Chinese restaurants in Korea. That’s kind of interesting, how American infiltration into cuisine is becoming a style of its own. There’s the Japanese-Italian thing that happened with the spaghetti movement, and it’s happening as well with American and Chinese food. Things like orange chicken, beef and broccoli, and sweet and sour pork — that’s becoming a thing, which is really interesting to see in Korea. I think it shows that [South Korea} has a lot of international students that are coming to the States and are bringing back the cravings they develop. It’s broadening the spectrum of Korean cuisine in general. Fried chicken and beer is this insane thing that every place [in Korea] has now. They call it Chi-Mc. Chi is the chicken component. And Mc is short for Maekju, and Maekju is how you say beer in Korean.

So American Southern food is taking over the whole world? Yeah, it’s really interesting. Obviously they do their own spin on it. They serve Korean beer, and they have umami-focused fried chicken as opposed to buttermilk. They use chili flakes and things that focus on the Korean pantry. 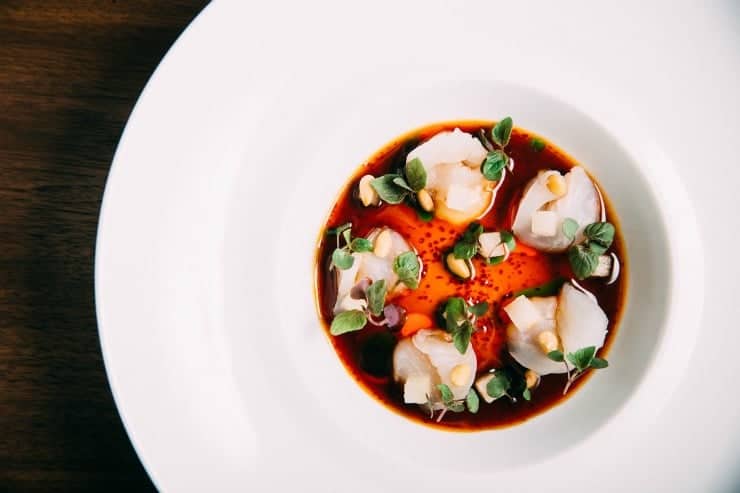 How has this Korean trip influenced your menu at Intro? Coming in July we’re actually going to launch some specific dishes that I had gotten a lot of inspiration from while I was in Korea. When I was there last time, I had a blowfish meal. It wasn’t the first time I had it, but it was the first time I wanted to try to recreate it here. They utilize every part of the fish. First off, you have the premier cuts. You have sashimi. Then they scrap the bones and make a tartare out of it. They take the tails and the collars and dredge them and fry them, serve them in a chicken karaage style like in a Japanese restaurant. They’ll take the rest of the carcass and put him with crab, shrimp, abalone, and clams. It’s like their nose-to-tail version of what’s going on with pig, they’ll do with blowfish. We’re going to be doing something like this but with Fluke.

Before you were traveling through Korea, you also spent some time in Southeast Asia. What brought you to that part of the world? I could go to Asia for six months or I could go to Europe for six weeks, so it was kind of a no-brainer. I went to eight countries in six months, from Vietnam to Cambodia, the Philippines, China, Tokyo, obviously Korea. That in and of itself is probably the most influential trip I’ve ever taken. 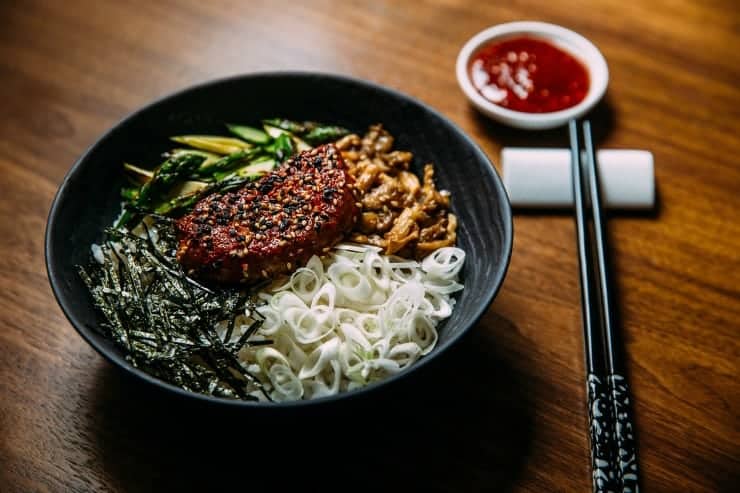 What made it so influential? Coming from culinary school and [being] trained classically, you have a lot of Western sensibility. You don’t question it because that’s what you were taught. Then when you go over there [to Southeast Asia], they don’t have those rules, limitations, or that philosophy behind their cooking. You see the most interesting and unique ways of approaching food. They really focus on making sure flavor is first and foremost, that enhancing and highlighting the food is more important than manipulating it.

It sounds like you learned a lot of alternative cooking methods in Southeast Asia. There were a couple specific things. For example a lot of vegetables, maybe 95% of them, are water soluble, which means when you cook them in water, the water will taste like the vegetable. To get around that, they’ll blanch vegetables in oil. I’ve never seen it before, but it’s genius because it doesn’t lose any flavor. It concentrates everything into the vegetable itself. You’ll eat a green bean and wonder why it’s so green bean-y. 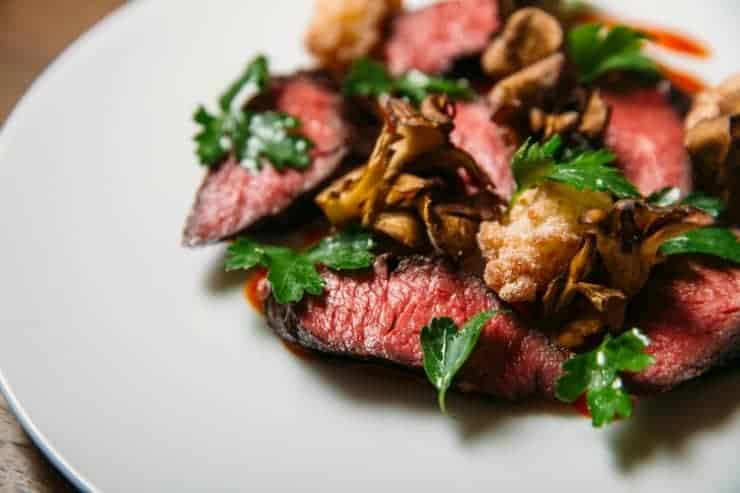 When you were in Vietnam, what was your experience with the popular wet markets or street markets? [The farmers and sellers] have a lot of pride because it’s their livelihood. There’s no ego associated to it, it’s more survival. They know that by having the best apples, they’ll be more successful than the person next to them. So you’re able to buy really high quality products easily. And the wet markets are everywhere. In Vietnam specifically, you can’t get away from them.

I imagine you were eating and cooking a lot with the food you found at the markets. Was there any standout favorite market find? In Taipei they have these things called rose apples. They look almost like a combination of a golden delicious apple and a tulip. They’re spectacular. They’re really juicy and floral. I’ve never seen them before, and I haven’t seen them since then. 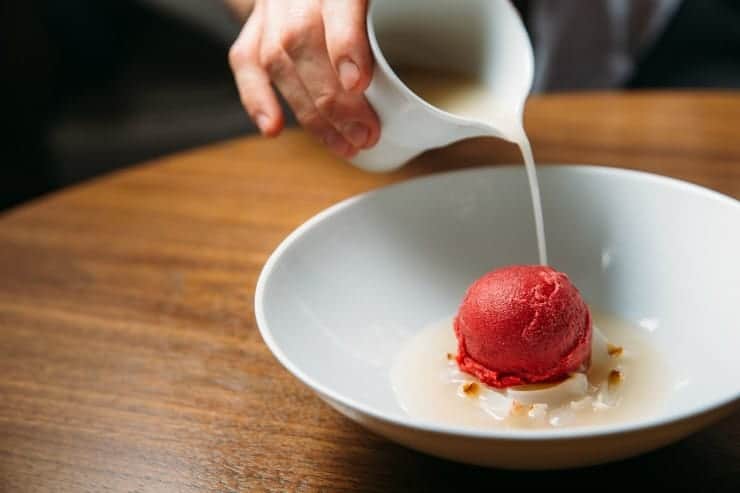 Blackberry Sorbet Float made with fresh lychee and makkoli (a sparkling sake) at Intro. Photo: Intro.

What advice would you give someone who wants to start tasting and traveling around the world? Eat what the locals eat. There’s a lot of fear factor food in Asia catered toward tourists, and locals don’t eat that stuff. So eat authentically. Don’t go for the sake of being adventurous, there’s plenty of adventure anyway. I had a fried tarantula in Vietnam that I wasn’t planning on eating, but it’s something they eat as a snack there and that’s the only reason why I ate it. Also, eat even if you’re not hungry. I made this rule for myself where if it was around and I’d never had it before, I was going to try it. That resulted in a lot of experiences. It’s the reason I ate the rose apples.

Where do you think you’ll travel next? I really want to go to Peru — that’s on my shortlist. I want to go to New Orleans — I haven’t been there before, which is crazy to a lot of people considering all the places I have been. Those are the two on my really shortlist right now.