Christine Ha was launched into the spotlight after becoming the first blind contestant and season 3 winner of Gordon Ramsay’s widely popular MasterChef. Ramsay has said she has “a palate of incredible finesse… I know chefs with Michelin stars that don’t have palates like hers.” It was this talent combined with her passion that led her to defeat over 30,000 American cooks to win the challenging MasterChef title, cash prize, and cookbook deal.

Her resulting book, Recipes From My Home Kitchen: Asian and American Comfort Food, was a New York Times best seller. Ha has been featured on NPR and the BBC, and travels around the globe to give keynote addresses and TEDx talks. She’s continued her television work as a judge on MasterChef Vietnam and as a co-host on the Canadian cooking show Four Senses, currently in its fourth season. When she’s not on set or cooking at home, you can find Chef Ha traveling around the world in search of new flavors. She documents her gourmet life on her blog, The Blind Cook.

You’ve said that food and words are your creative outlets and your portals for connecting with others. How has travel helped strengthen your two passions of writing and cooking?
As an artist in both the fields of creative writing and culinary, it’s important to experience as much in both areas as possible to increase knowledge, understanding, and compassion. Travel has allowed me to experience other cultures and meet people who live differently than me, and these occasions fuel my writing and cooking. When I get to know others through their food, it feeds my creativity in the kitchen. Travel is enriching. Whenever people ask me how they can become a better cook, one of my pieces of advice is to travel. It keeps your mind open.

What have been your top travel experiences of all time, and how have they influenced your kitchen creations?
Some top places I’ve had the privilege of traveling to include Tokyo, Ho Chi Minh City, Barcelona, and New York City. All of these places have distinct characteristics to their gastronomical landscape, from the Michelin restaurant to the street food stall to everything in between. All of these dining experiences inform my palate, teach me what I like in terms of flavor and presentation, and I take these memories home to my own home kitchen. The variety of experiences I’ve had have helped me learn more about my own personal preference when it comes to food. In the process of learning about others, I’ve been taught about my own self. 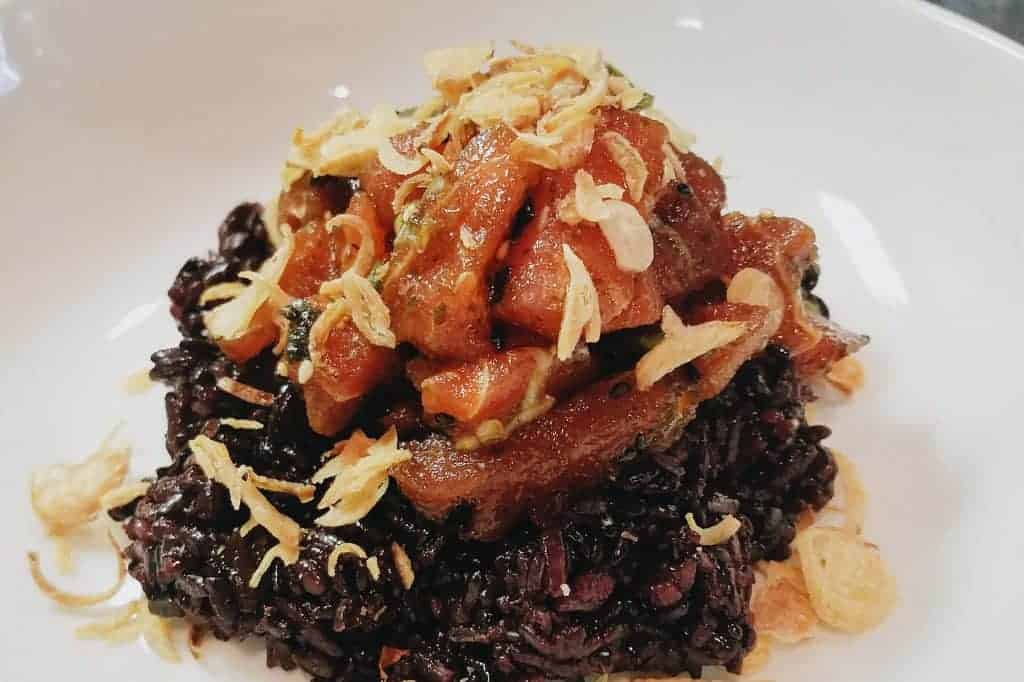 Do you have a favorite cooking technique or tradition learned abroad?
I don’t have one absolute favorite, but everything I do now in my own kitchen speaks to all my travels abroad. Japan has taught me to admire artisans and craftsmanship. Vietnam has taught me the importance of balance in food, marketability, and ingenuity. I learned about leisure and quality of experience in Europe. I love New York for its innovation and variety.

You’ve been sharing snippets of your latest travels on your blog and Youtube channel. What were some of your gourmet highlights from your most recent trips?
Angel’s Share speakeasy in New York. Tamarind crab and other street foods like noodle soups in Vietnam. Modern south Asian food at Dishoom in London. Korean barbecue in L.A. Girl and the Goat in Chicago. 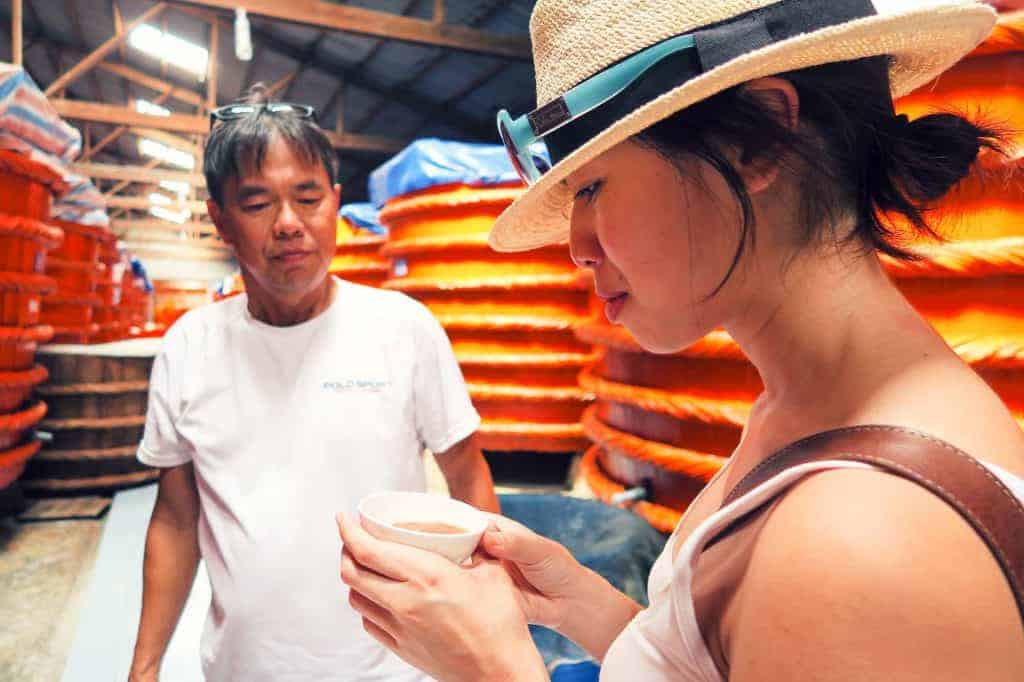 What advice would you give someone looking to expand their food horizons and be an adventurous taster while traveling?
You may only get this one opportunity, so try everything at least once. Twice (i.e. two bites) is better. Learn where the locals eat by asking your cab driver, a neighboring diner, or put out a call on social media.

What’s next on your travel bucket list?
I backpacked through western Europe when I had just graduated college, but now that I’m older and have a little more money in my pocket, I’d like to go back and try some more foods in Italy and France. I’ve been to Sweden but would love to eat more in Scandinavia. These are all unplanned wishes, but something I do have planned is a trip to Taiwan, China, and Hong Kong. There will be a lot of eating then! 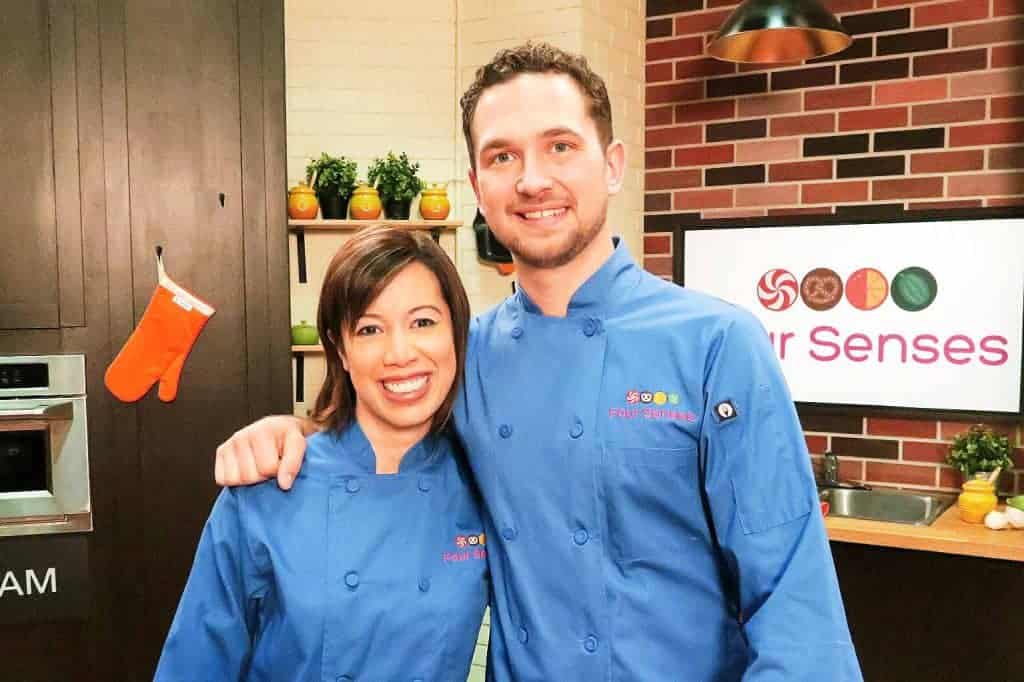 On the set of Four Senses with co-host Chef Heinrich

The newest season of your cooking show, Four Senses, just launched this January. What else can we expect to see you working on this year?
I’m working on a second cookbook that will teach people to cook with more intuition and less of a dependence on following recipes to a T. I’m hoping people will learn about food, how flavor profiles work, new techniques, etc. I want to give people more confidence in the kitchen so that they, too, can cook mainly using their sense of smell and taste.