Sean Fredericks and McKinze Cook are a husband and wife team who came to love the country of Georgia while serving in the U.S. Peace Corps. They spent countless hours in Georgian kitchens and vineyards learning alongside their host family, friends, and local restaurateurs – developing and deepening their appreciation of Georgia’s ancient winemaking traditions and the country’s unique, flavorful cuisine.

In 2013 they founded Kargi Gogo, a Georgian food truck in Portland, Oregon that appeared in the Associated Press, USA Today, Serious Eats, Plate Magazine and was featured on The Cooking Channel’s “Eat Street” program. After nearly three successful years, Sean and McKinze closed the food cart to focus on importing and distributing freshly-ground Georgian spices, and offering cooking classes and pop-up “supra” dinners.

“We’re not going to tumble to our deaths — just don’t look down,” I said as our small car careened around a winding mountain pass with only a narrow shoulder of loose rock between us and the valley far below. We were piled into the backseat of a relative stranger’s car, winding our way up the side of a mountain in Guria, a lush western province in the Republic of Georgia. My wife, McKinze, sat in the middle between me and a friend, trying not to let her fear of winding mountain passes get the best of her.

Our driver was a stout and affable man named Beso, whom we had met the night before. With him in front was his wife, Lana, and young daughter. We had just come from the small village of Nabeghlavi, famous for its water — naturally carbonated, rich with minerals, and widely believed to have health benefits. We had filled every empty plastic bottle we could find with the water, which flowed freely from a rustic spout outside the nearby bottling factory. That was to be the end of the day’s excursion, but as is so often the case in Georgia, you never really know quite what will happen.

I took a big gulp of the sulphuric water as we rounded another corner. “Nela, nela,” I said. Slow, slow. Beso chuckled warmly. Ahead a short distance were several cars, pulled over and with twenty or so young men standing around. As we hurtled past them, several of them jumped up and started yelling, waving their arms wildly, warning us not to go any further. Bad road conditions. Ice. Snow. Beso stepped on the gas, and into the snow we went. McKinze squeezed my hand tightly. Our friend groaned. “We’ll be fine,” I said, and I believed it. No harm would come to us. We were guests, and as the Georgians say, “Guests are a gift from God.” 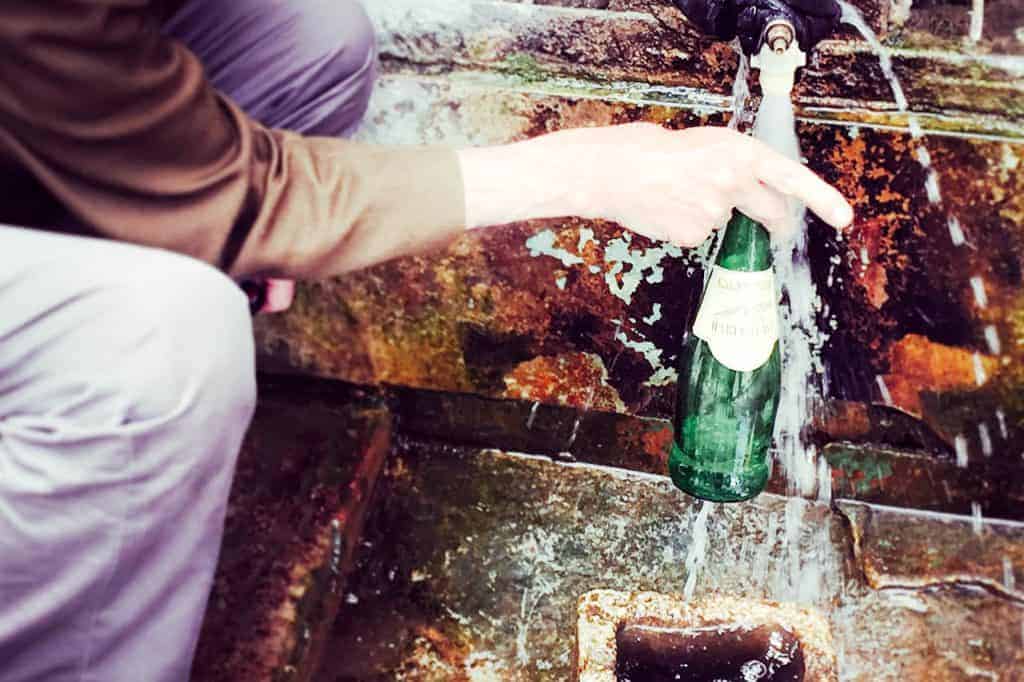 This wasn’t our first trip to Georgia. Six years earlier, our plane touched down and we began a 27-month adventure as U.S. Peace Corps volunteers — one that has turned into a lifelong passion. We lived and worked in a small city, integrating into our community and experiencing first-hand the joys and challenges of life in a rapidly developing post-Soviet country. We also felt the magnetic appeal of Georgian hospitality for the first time — genuinely warm and inviting people, simple but delicious food, and a wine culture unparalleled in the world.

Returning home after our service and settling in Portland, Oregon, we soon found ourselves missing many of the dishes we had grown accustomed to eating in Georgia on an almost daily basis. Stuffed cheese bread called khachapuri, juicy khinkali dumplings and badrijani, grilled strips of eggplant wrapped up with walnut and garlic puree. Soon after, we opened a food cart in downtown Portland, which we named Kargi Gogo(meaning “good girl” in the Georgian language, a compliment and term of endearment used often). For nearly three years we poured our heart and soul into the food cart, introducing thousands of people to this food we loved — an exotic yet accessible mix of Eastern European, Mediterranean, and Persian flavors.

Last year we began importing high quality hard-to-find Georgian spices, making them available online to home cooks and professional chefs alike. As that business grew, we decided to close the food cart to give us the opportunity to pursue new adventures. One of those adventures was a trip back to Georgia for three months this spring to eat, drink, travel, and experience more of what makes this country such a special place.

Thus, on a sunny April afternoon we found ourselves on a mountain road to Bakhmaro — a resort town famous for wooden houses on stilts, clean air, horse races, and lots of snow. The night before someone told us nine feet had fallen. Someone else said 21. Another claimed 27. The road itself is apparently completely impassable up to nine months out of the year.

Beso maneuvered the car around another corner, and we were met with a giant mound of snow. This, apparently, was the true end of the road, even though Bakhmaro itself was still many kilometers ahead. Everyone in the backseat breathed a collective sigh of relief and we spilled out of the car to take in the view.

One of the first things you’ll notice about Georgia if you visit — which you should — is its stunning beauty. About the size of South Carolina, it packs an enormous amount of diverse scenery into its borders. In the far west, up and down the border of the Black Sea, you can expect rocky beaches, palm trees, and humidity that leaves you soaked with sweat in the summer and with rain in the winter. A few hours inland, you can be in the midst of some of the tallest mountains in Europe, high above the clouds, looking down on snow-capped peaks. Go further east and you’ll find yourself surrounded by vineyards in the region of Kakheti, stretching out over flat swaths of land perfectly suited for carrying on the centuries-old traditions of what many archaeologists consider to be the birthplace of wine. 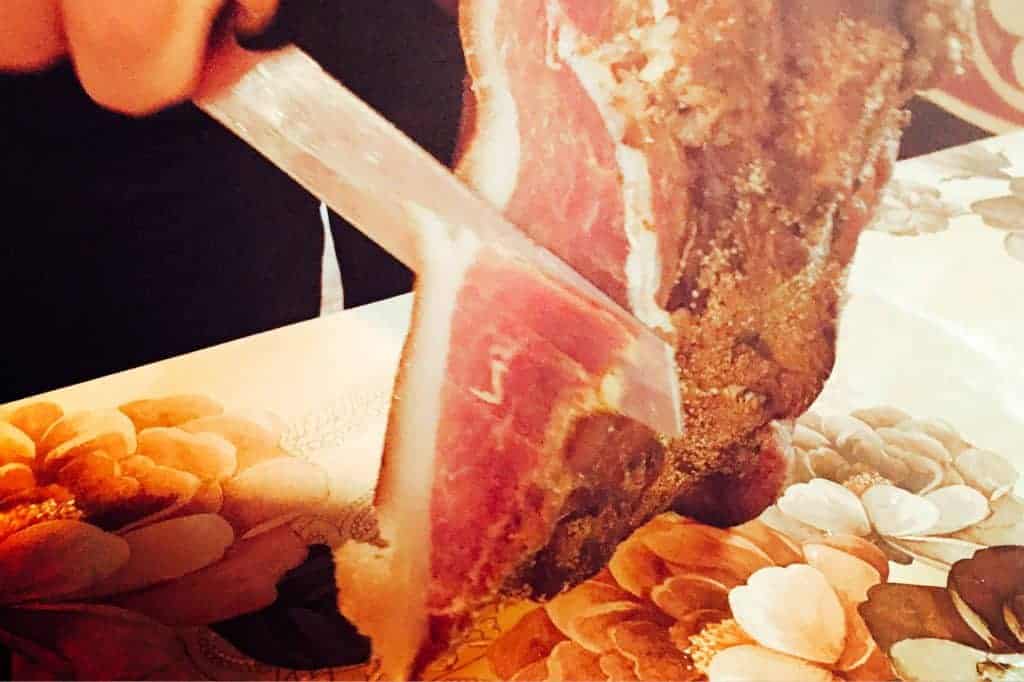 The view here in Guria was spectacular as well — white mountains at eye-level and lush green valleys below. We gathered around the hood of the car to share some tonis puri, bread baked on the sides of a special brick oven, and sugary fruit soda referred to as lemonade, whatever the flavor may be. In Georgia, there is always tonis puri, always lemonade, and always sharing.

Soon it was time to go, and we piled back into the car for the treacherous journey back down the mountain. Thankfully it was uneventful, and we soon we found ourselves on more level ground heading for… home? Not without a few more unplanned stops. An impromptu tour of the bottling factory in Nabeghlavi where we had started our day (amazing), a visit to the impressive and beautiful Dedata Monastery perched on a hilltop (where they always have a room ready for the Patriarch of the Georgian Orthodox Church, should he decide to stop by), and a visit to Beso’s childhood village home for dinner.

We were greeted at the gate to the yard with hugs and kisses and ushered into the house. Like most Georgian village homes, this one was spacious and largely untouched by modern conveniences, save a satellite dish streaming hundreds of Turkish and Russian television channels. We sat near a wood-burning metal stove, blackened and warped from years of dual use cooking and heating the home. As the women scurried around in the kitchen, Beso emerged from behind a rickety door holding a large pork shoulder that he butchered, smoked, and preserved himself. He whipped a pocketknife out of his jeans, sliced off a hunk, and handed it to me, his fingers already glistening from contact with the succulent fat. It was as rich and decadent as anything I’d ever eaten, the intense saltiness stinging my tongue.

A single light bulb hung above the table, which was groaning under the weight of plates piled high. There was khachapuri cheese bread, fresh tomato and cucumber salad, zesty pickled vegetables, various meat stews spiked with exotic spices like crushed marigold flowers (zaprana), blue fenugreek (utskho suneli) and loads of coriander (kindzi), fresh bread, grilled pork with sour plum sauce (tkemali), and several pitchers of wine. Friends and neighbors appeared from out of nowhere, and our supra (feast) was ready to begin. 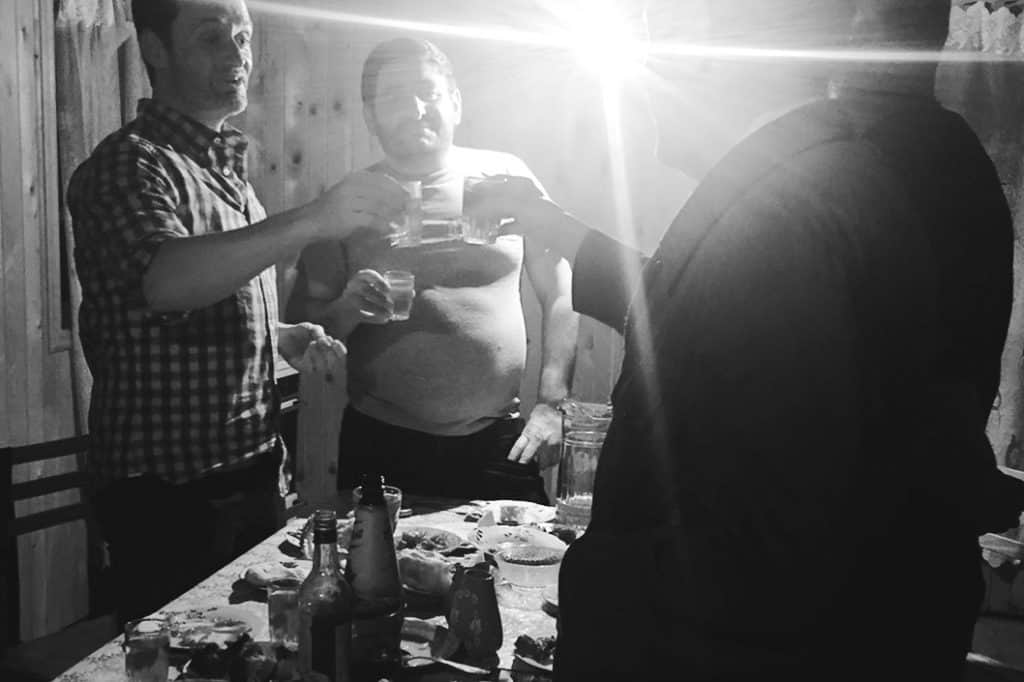 Over the next several hours, time flew by as quickly as the wine flowed. Following centuries-old traditions, Beso acted as our toastmaster, rising to speak from the heart about subjects ranging from God, to family, to peace, to friendship, to ancestors, to children, and so on. At the end of each toast, we would clink our juice glasses filled with wine and drink. All of it, of course.

Twenty four hours earlier we had just met but we would leave that evening as new friends, having shared food, wine, and experiences. These people, these strangers, literally took us into their home and fed us, drank with us, and shared with us the places around them that they were proud of. We didn’t ask for any of it. They just did it. This, to me, is the true spirit of Georgia — what makes it such a special place.

It’s still a little under the radar, but as word about Georgia’s amazing beauty, food, wine, and hospitality gets out, it won’t be long before the cobblestone streets of Tbilisi are as packed with wide-eyed travelers as cities like Prague and Krakow. The infrastructure is developing quickly, and entrepreneurs are opening world-class hotels and restaurants seemingly every month. Its time is now. Georgia is ready to welcome you — with open arms, full plates, and overflowing glasses.

You can experience the flavors of Georgia at home with authentic spices from Kargi Gogo.