On a perfectly frigid Sunday under clear blue skies, dozens of guests expectantly arrived at Montinore Wine Estate in Forest Grove, Oregon for a day of feasting and celebration. After a taste of Umbria Coffee, guests were shepherded into the winemaking room to find an Italian man dressed in green and red standing on a platform behind a large section of pork armed with a large cleaver and an even larger grin. Thus commenced the Maialata festivities with acclaimed butcher Dario Cecchini.

For the seventh year in a row, Rudy Marchesi and Cathy Whims, owners of Montinore Wine Estate and Portland’s beloved Nostrana restaurant, respectively, brought together foodies and oenophiles of all stripes to indulge in their annual Maialata — feast of the pig  — celebration. For the third year in a row, the festival was bolstered by Dario Cecchini at the helm, known as a beloved butcher of Panzano in Chianti, and who recently was featured in Season 6 of Chef’s Table.

To understand why an Italian butcher would be the headliner at a winery-based event, it’s important to understand the deep tradition and history of Maialata. In the depths of winter, Italian families celebrated the Maialata by sacrificing a family pig to meet their protein needs until summer brought a bounty of food. Skillful and enterprising Italian cooks would utilize all parts of the pig — down to the tails and trotters — in fresh meals and preserved products. 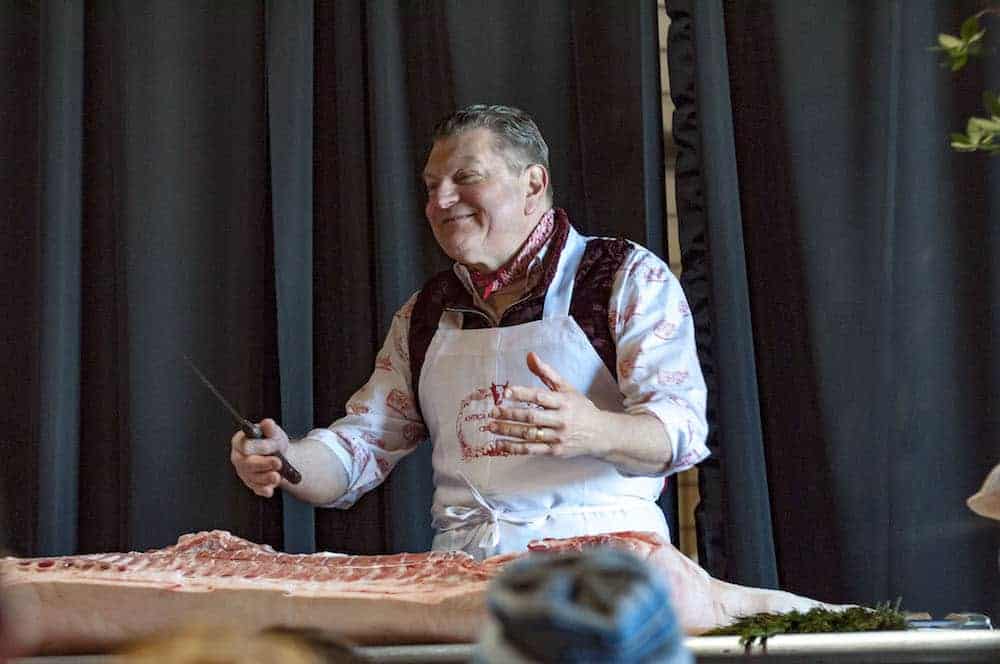 As Cecchini skillfully broke down the meat and flung spices onto the emerging roast, he wove together a fascinating personal story with a demonstration in whole hog butchery. He shared tales ranging from his tentative foray into his career as an eighth generation butcher, to the power a good meal has had in breaking down centuries-old religious barriers. Central to his stories was his love and gratitude to the land and animals that sustain us. He is here for the ‘Miracles on Earth,’ and finds no clearer expression of that than the bounty of olives, vineyards, produce, livestock, and land outside of Montinore’s double-wide cellar doors in Oregon’s fertile hills and valleys — and in his home in Tuscany, of course.

Following lunch, guests broke into five groups to take part in cooking demonstrations across the property. Guests had the option of continuing their exploration of butchery with a demonstration by Nostrana’s butcher and sous chef Rob Roy or by stuffing sausage with Portland-based The Nightwood Society. Guests drawn to the more carb-friendly parts of Italian cuisine enjoyed the opportunity to craft potato gnocchi with Nostrana’s Cathy Whims and Burrasca’s Paolo Calamai in the pool house, or hand make Garganelli pasta with Rick Gencarelli of Portland-based restaurants Grassa and Lardo. The fifth option was a salting and preserving workshop with chef, forager, fly fisherman, hunter, and gardener ambassadors Eric and Sarah Bartle of The Wilderness Hunters. 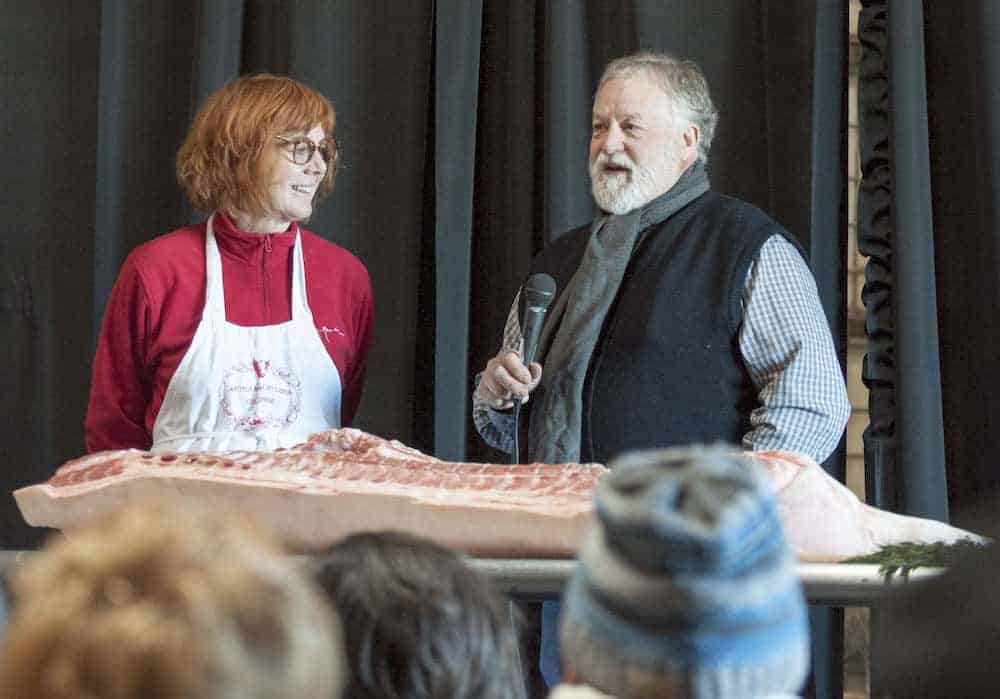 Following the workshops, guests lingered for more provisions of espresso and wine during the Maialata marketplace, with servers reaching further into Montinore’s private reserves to pull unique vintages and Montinore classics. A variety Oregon-based vendors and local food purveyors and artisans presented their wares and products, including regional wines and locally made olive oil.

The activities culminated in a cellar feast, complete with candlelit rows of tables and a cheerful accordion player. Here, chefs, cooks, and volunteers transformed the products of the demonstrations and other raw ingredients into a five-course meal. Accompanying every course were increasingly aged, one-of-a-kind bottles and vintages. Paired alongside the final course, a bottle of 1998 Pinot Noir from Montinore’s private reserves made the rounds, creating a seamless accompaniment with the platters of pork. The guests — which included sommeliers, chefs, hobbyist foodies, doctors, lawyers, home cooks, fans, travelers, and more — all cheered the celebration the best way they could — by raising a glass of Montinore’s finest. 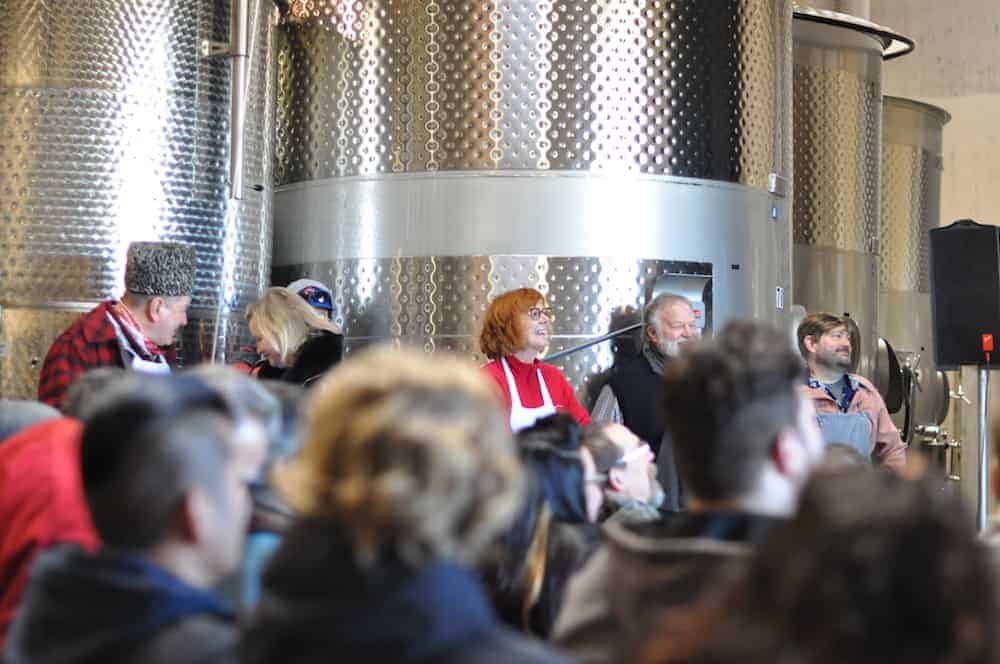 Casually hosting the event was Montinore’s very own Rudy Marchesi. “This year’s Maialata was the best to date. I think everyone had a fantastic time from Dario Cecchini’s informative and inspirational butchering demonstration to the hands on classes in various food arts to the spectacular dinner in the wine cellar,” Marchesi said. “A number of guests told us it was the best winery event they had ever attended.”

For more information on this year’s Maialata celebration, and for details on how to stay up to date on next year’s event, visit Maialata’s website.