If you’re interested in food and wine travel, exploring Sicily with Experi is a must. It’s the crossroads of the Mediterranean once inhabited by Phoenicians, Greeks, Romans, and Normans. Enjoy meals prepared from the freshest local ingredients, explore ancient ruins and cultural treasures, soak in the diverse landscapes and beauty of the Mediterranean’s largest island. You can also expect a visit to Mount Etna, Europe’s highest active volcano. We asked one of our local guides, Guglielmo Fiorista, a few questions about what makes this volcano so remarkable. 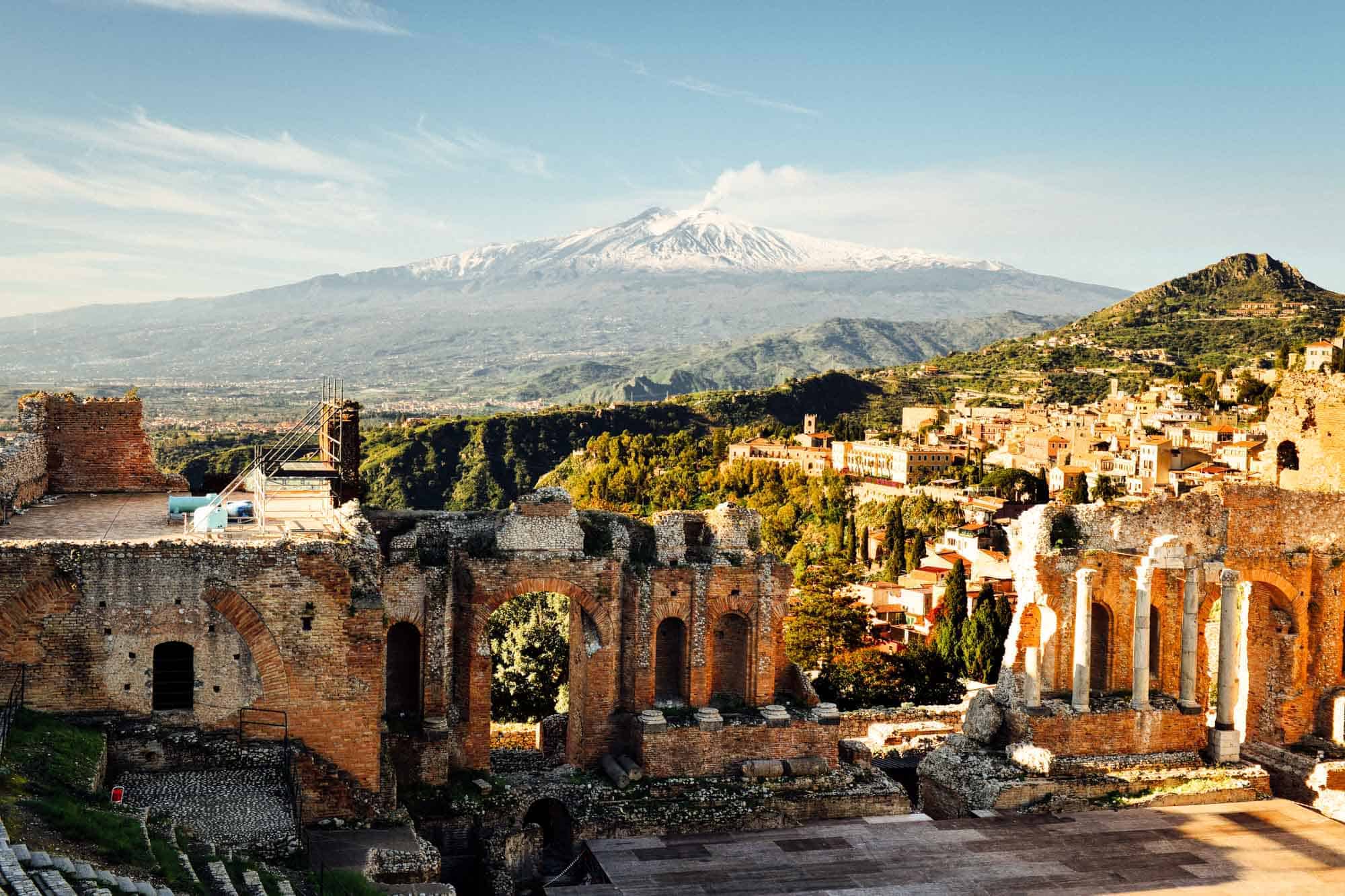 Theater ruins in Taormina, with Mount Etna in the background.

Q: We know that Mount Etna is an active volcano, similarly to Mauna Loa in Hawaii and Sakurajima in Japan, in what ways are they different?

An eruption can take on different characteristics based on numerous factors, including the chemical composition of the magma and the layers it encounters during its ascent into the reservoir. The eruptions are divided into explosive and effusive. In explosive eruptions, magma is fragmented into particles of various sizes which are expelled into the atmosphere with violence and cool to form pyroclasts (slag, ash, and pumice). In effusive eruptions, the magma emerged on the surface takes the name of lava and form flows that flow along the sides of the volcano.

Some volcanoes have mainly explosive activity, others effusive, but in the same eruption, explosive and effusive phases can occur (like Etna). Many eruptions take the name of the volcanoes on which they are peculiar: the activities can be (in order of intensity from the lowest to the highest), Hawaiian, Strombolian, Vulcan, Freato-magmatic, and Plinian.

Not very explosive, they consist of very fluid lava flows. The lava fountains sometimes generated by eruptions can reach a kilometer in height.

They are named after Stromboli in the Aeolian Islands and consist of a succession of moderate explosions, separated by even long time intervals. These activities are characteristic of many volcanoes, including Etna.

Sakurajima is constituted by the formation of eruptive columns ten kilometers high, composed of ashes, pumice, and gases. The term “Plinian” derives from Pliny the Younger who described the disastrous eruption of Vesuvius in 79 AD which destroyed Pompeii and Herculaneum. During these eruptions, the eruptive column collapses on itself due to too much weight, falling on the flanks of the volcano giving rise to pyroclastic flows, capable of incinerating anything as they pass.

Aitna (Etna) is the reason why people consider Etna to be a “mountain-mother” and not a “volcano-destroyer”. “The mountain is good, just as Agata, patron saint of the city of Catania, good (from the Greek Agathòs, which means Good)”. This explains the reason why the local people consider the Volcano as a woman, the Mother Etna: a mother will always protect her children. “A Muntagna” (the mountain) is, therefore, female: its impetuousness and its elegance make Catania and surroundings unique.

Q: What are the Sicilian legends surrounding Mount Etna?

Legend of Etna of the beautiful Nymph:

Daughter of Uranus and Gea (personification of Heaven and Earth), Nymph Etna was the protagonist of several episodes. From the loving union with the god of fire Hephaestus. The legend tells that Nymph Etna completed the pregnancy of the twins hiding under the Volcano. The future unborn children will see the light twice: the first when Etna gives birth, the second when they come out of the belly of the mountain.

Also known as Vulcan in Roman mythology, Hephaestus (in ancient Greek Ἥφαιστος) was an important god of Greek mythology. According to tradition, Hephaestus is the god of fire, of engineering, but also of arts such as sculpture and metallurgy.

According to legend, Hephaestus was conceived by Hera, his mother, because she intended to take revenge on Zeus, her husband since he regularly cheated on her with other lovers. But as soon as He saw Hephaestus, his son, he found him so ugly that he already hurled him from Olympus. Hephaestus is represented as an ugly man, large and stocky, quite the opposite of other gods. But he was extraordinarily strong and very good in the art of working metals and handling fire; no one could match it, so he is often portrayed with a hammer and anvil and near the fire.

According to legend, the forge of Hephaestus was on the slopes of Etna, which is why the volcano rumbled and threw lapilli. Hephaestus is represented with anvil, hammer, pincers, sometimes with an ax in part. Hephaestus is a character of the Iliad, he was raised by the Nereids after his mother Hera had repudiated him. Hephaestus took revenge on his mother by building a golden throne, magical so that once the goddess sat on it, they would remain imprisoned. Hephaestus agreed to free her only if her mother had recognized her as God. He married Aphrodite who, however, was not in love with him and secretly betrayed him with Ares.

In this legend of this truly singular diver that is Cola Pesce, in all the variations of the folk tale, always speaks of the Etna fire, which boils under the sea: and in a wide variation of the legend, the Catanese sailor dies just burned by the submarine fire of Etna, because King Frederick, incredulous of the report made by Cola, demanded that he bear a proof of what was said.

To which, Cola Pesce took a ferula (the well-known, very light wood that floats easily) and said: Majesty, this ferula will return burnt to the surface of the sea, and this will be the proof that under the sea exists the Etna fire; but I will not return, because the underwater fire will destroy me.

And so it was.

Q: We know that in recent years, lots of wineries have started planting vines on the slopes of Mount Etna. Can you tell us more about it? What are the indigenous varieties grown?

Etna is the first DOC established in Sicily. (The Denomination Of Controlled origin, known by the acronym DOC, is not a real brand since it is common to a large variety of products, but a name used in enology that certifies the area of ​​origin and bounded of the collection of grapes used for the production of the product on which the brand is affixed, the brand is the symbol placed on the product that identifies it, so we can have different brands with the same acronym doc. It is used to designate a quality product and renowned, whose characteristics they are connected to the natural environment and to human factors and respect a specific production disciplinary approved by ministerial decree.)

The Etna area has more than 40 different varieties of wine vines. Here the most important ones:

Nerello Mascalese: A black grape variety historically prevalent on Etna, takes its name from the territory of Mascali where it was selected a couple of centuries ago. It is the basis of red Etna DOC, in which at least 80% of Nerello Mascalese grapes must be present. Like the other Etna grape varieties, Nerello Mascalese is late-ripening, so it is harvested around the second decade of October. It produces wines with different nuances depending on the slope, the altitude in which it is cultivated and the farming system, generally united by a large structure and an elegance of perfumes destined to evolve further with aging.

Nerello Cappuccio: Nerello Cappuccio, or Mantellato, is another red grape variety widespread on the volcano which, together with Nerello Mascalese but in much lower percentages, represents a large part of the ampelographic panorama of the Etna vineyards. Its name derives from the characteristic bearing of the plant. It is present in red Etna DOC for a quota that cannot exceed 20%. To the wine, it gives a greater chromatic intensity thus making up for the low coloring capacity of Nerello Mascalese.

Carricante: It is a white grape variety that is found exclusively on Etna and its name refers to the great productivity of the plant, meaning in fact for carricante “plant full of fruits”. It is particularly widespread on the east side of the volcano and is the basis of white Etna DOC.

Cataratto: Catarratto is the most common white grape variety in Sicily. It presents different clonal varieties different in color and shape of the bunches and is often used in blends with other vines, as in the case of Etna Bianco DOC, to which it gives structure, balance and its typical fruity aromas.

Q: What is it like to summit Mount Etna?

Climbing to the summit of Etna is a unique thrill for trekking lovers.

You reach the 2900m first with the Unimog 4×4 vehicles and then accompanied by a volcanological guide the 3330m of altitude. The view is spectacular.

However, this type of excursion is only recommended for those who practice sport and have no physical problems, especially respiratory, since the gases emitted from the crater can be annoying.

Obviously reaching the summit depends on whether there is volcanic activity or not. It happens that for security reasons the summit is forbidden.