The liquid and smoke appeal of Cuba. We’re talking about rum and cigars, of course, the quintessential symbols of the Caribbean country whose allure has lasted decades and transcended generations. The culture of Cuban rum and cigars has given Cuba that permanent ambience of vintage glamour and decadence.

Focusing solely on Cuban-style rum is enough to fill books, as its history is rife with political feuds, prohibition protesters, Nobel Prize-winning novelists, actual bats in the belfries, and thousands of barrels of oak-aged clear rum. It’s a complicated history for a clean-tasting liquor, but definitely worth knowing. 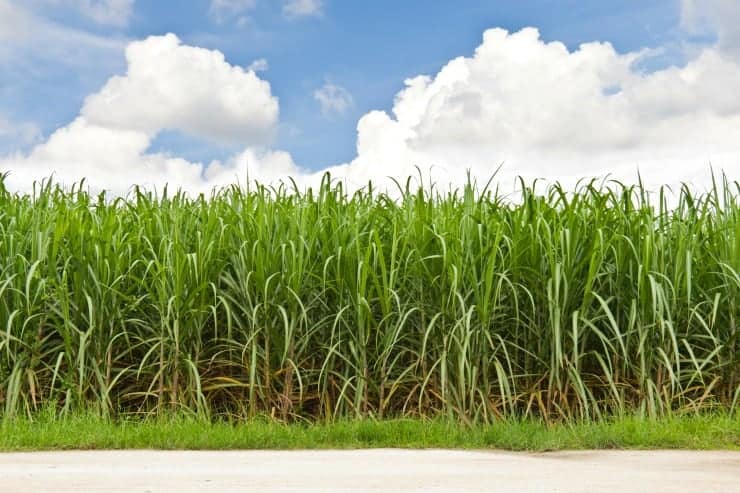 We owe the creation of white rum to the Bacardí family — yes that Bacardí family. If you think Bacardí rum is Puerto Rican, you wouldn’t be entirely wrong (but not completely correct either). Though it’s no longer produced in Cuba, the Bacardí family recipe for white rum was developed by patriarch Facundo Bacardí Massó in Cuba, immortally tying it to the Cuban nation.

Sugarcane grows in abundance in the rural countrysides of Cuba, and from this sugar and molasses, rum has been made for centuries. When Facundo Bacardí emigrated to Cuba from Spain in 1830 at the age of 16, the common rum was crude, dark, and unfiltered. This rum was considered a cheap drink for the lower classes, and was never available in high-end taverns for the elite. 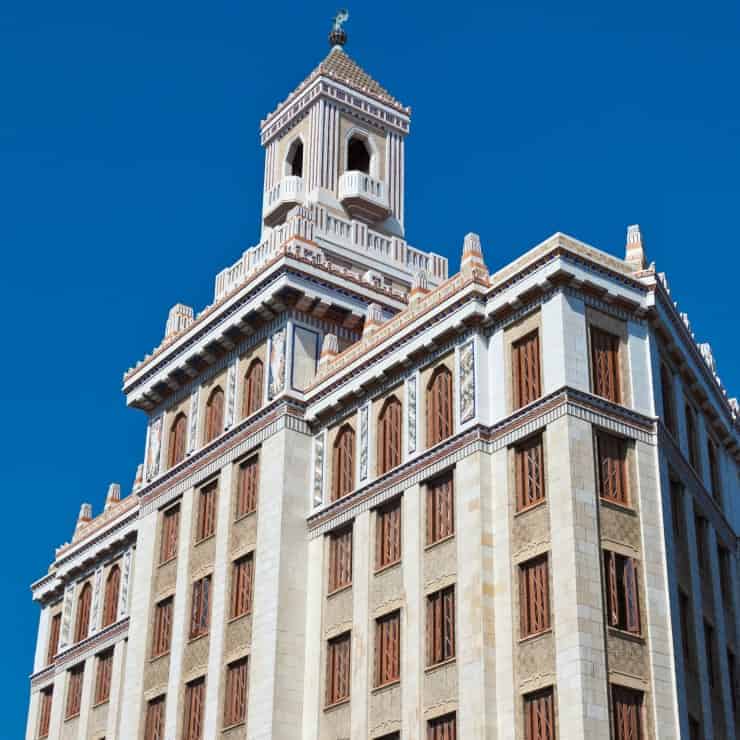 The Bacardi Building in Havana, Cuba.

With a family already in the spirits trade industry, Facundo Bacardí began his attempt to purify, refine, and essentially tame rum into a liquor for the high society of Cuba. A combination of experimentation and persistence yielded a process that created a clear, mellow-flavored rum. Aging the rum was also a key factor in perfecting the unique flavor. Ron anejo, meaning “old rum,” is the type of rum Facundo created and is now the predominate rum in all Spanish-speaking countries, as well as in the United States.

The popularity of this tamed rum grew throughout Cuba, making the Bacardí family a cultural entity in and of itself. Five generations of the Bacardí family produced rum in Cuba, setting up the first distillery in 1862 in Santiago de Cuba and another in the now famous Art Deco styled Bacardí Building in Havana. These distilleries were both known to have colonies of fruit bats living in the rafters and bell towers, drawn to the sweet scent of the molasses. This is where the well-known bat logo originated. 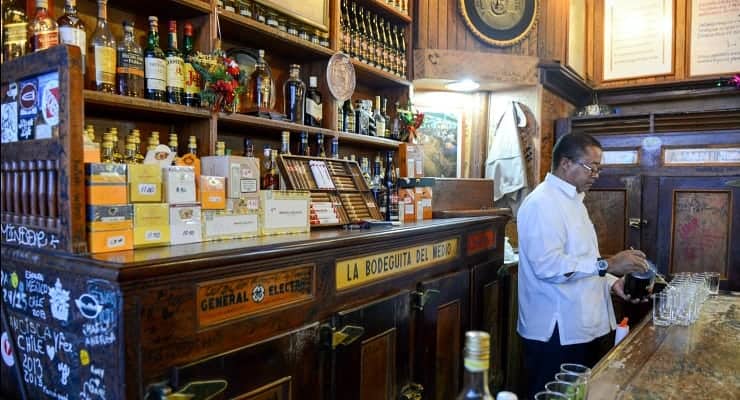 The keys to Cuban rum: a quick lesson

Rum is made from sugarcane byproducts — either molasses or sugarcane juice. The famed cuban white rum is almost always made directly from molasses, using a four step process of fermentation, distillation, filtration, and aging. The smooth, mellow flavor of Facundo Bacardí’s tamed rum is the result of a three notable refinements in rum production.

Outside the city of Santiago de Cuba, in the dense sugarcane fields, the patriarch Bacardí discovered a distinct strain of yeast. The special strain would later be called “La Levadura BACARDI,” and is patented today. The yeast gives Bacardí rum its specifically crisp and clean flavor profile, perfect for mixing in cocktails with citrus and mint, and has been used to make Bacardí rum for over one hundred and fifty years.

Bacardí knew the impact wood could have in the aging process of spirits and spent time discovering the best flavor results. He determined slightly charred American white oak was best for aging his clear rum, producing the cleanest flavor. Today, white oak barrels are still used for aging ron anejo as a direct result of Bacardí’s experimentation in the mid 1800s.

Cuban rum’s mellow flavor profile can also be attributed to Facundo Bacardí’s pioneering of charcoal filtration in rum production. Owed in part to tragedy, Bacardí first thought to use charcoal as a way of removing impurities in the rum after a cholera outbreak in Cuba. Widespread disease caused all citizens to filter their drinking water through charcoal for health safety. Bacardí discovered the same process had a mellowing result in his rum filtration. 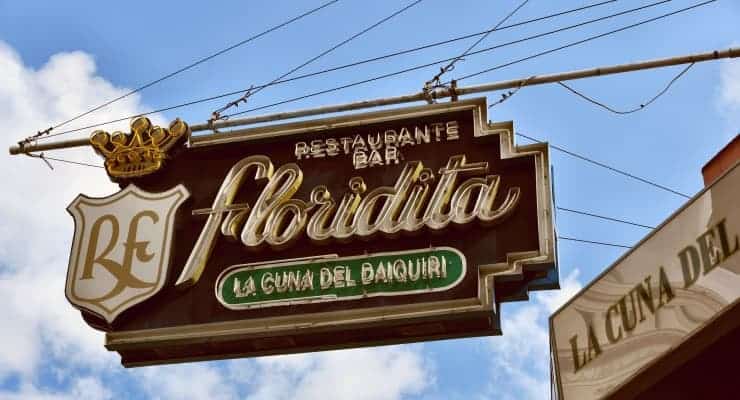 From local specialty to global sensation

Cuban-styled white rum rapidly gained popularity because of its distinct flavor, but also for several notable global reasons. The American Prohibition period of the 1920s and 1930s directly influenced an increase in rum production in Cuba as American tourists flocked there for alcohol-rich vacations. Henri Schueg, a member of the Bacardí family through marriage, came up with the widely known phrase of the time directed specifically at Americans: “Come to Cuba and bathe in Bacardí rum.”

Following the end of Prohibition, Cuba and Cuban rum stayed in the limelight as many celebrities vacationed there and even called the nation home. Literary giants loved Cuba, including the poets Pablo Neruda and Ezra Pound, and novelists Graham Greene and, of course, Ernest Hemingway. 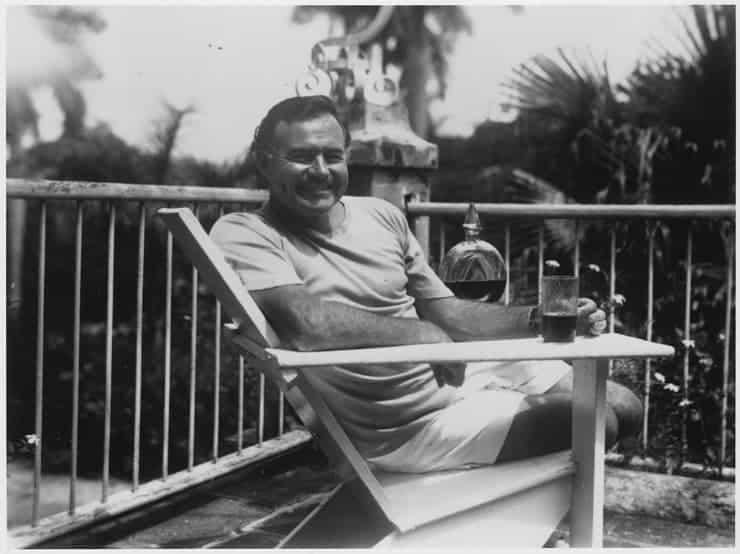 Ernest Hemingway in 1946 at Finca Vigía, his home in Cuba. Photo: NARA

From 1939 until the end of the Cuban Revolution, Hemingway lived in a small town called San Francisco de Paula in Cuba, in a house he called Finca Vigía. He featured rum, Bacardí, and his favorite rum-based cocktails frequently in his writings, including the novels “To Have and Have Not” and “For Whom the Bell Tolls.” To return the compliment, the Bacardí family threw Hemingway a grand party after he received the 1952 Nobel Prize in Literature for “The Old Man and the Sea.”

“My mojito in La Bodeguita. My daiquiri in El Floridita.”- Ernest Hemingway

During the political turmoil of the Cuban Revolution and the following changes, rum was frequently talked about in the media as a battle waged between the Castro regime and Bacardí. Although the Bacardí family originally supported Fidel Castro and other Cuban revolutionaries, the family eventually challenged the movement as Che Guevara’s pro-Soviet movement became popular.

This switch from proponent to resistor of Castro eventually led to the exile of the entire Bacardí family. On October 15th, 1960, the Castro regime took full control of all Bacardí company assets when it was declared that private property, including bank accounts, in Cuba were government possession. This is the reason that Bacardí rum is no longer manufactured or even found within Cuba today, as the family remains exiled in Puerto Rico. They were able to rebuild their empire using a specimen of the distinct strain of yeast they had stored in their international distillery in Puerto Rico, which was a sample of the same yeast found by Facundo Bacardí in Cuban sugarcane fields in the mid 1800s. 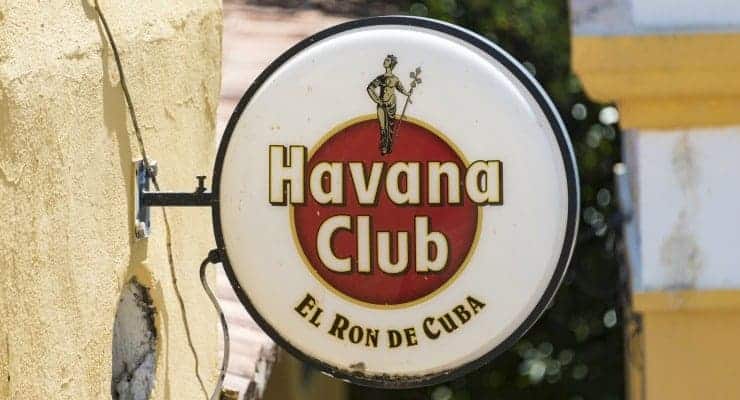 Following the seizure of Bacardí assets, the Castro regime nationalized rum production, creating the brand Havana Club, which remains the most well-known rum in Cuba today. Though Bacardí rum’s heritage is Cuban, it can no longer use the moniker “Cuban rum” as it’s produced outside of the country.

Havana Club, being a Cuban-styled white rum, is made using many of the techniques that the early Bacardí patriarch developed. An ongoing argument persists whether “Cuban rum” is rum created in Cuba or rum whose heritage is Cuban. This is the Bacardí versus Havana Club debate, and it continues today. 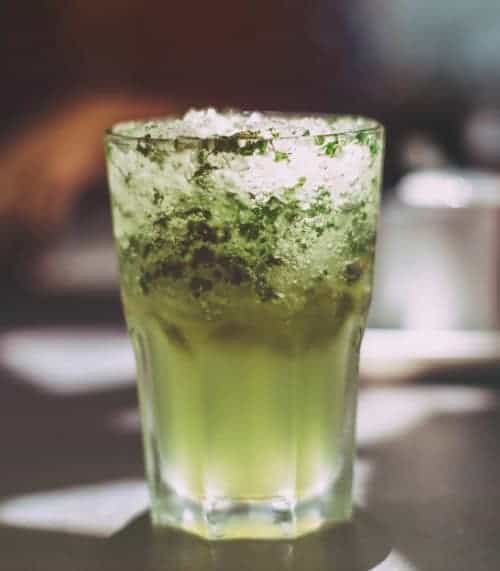 How to enjoy Cuban-style rum today

Though the debate continues on where the most authentic Cuban rum can be found, white rum is available internationally and should be tasted. Traditionally, great Cuban white rum is best savored in a cocktail. The three most famous coming from vintage Cuba are the mojito, Cuba Libre, and daiquiri.

The authentic mojito is made with simple ingredients: white rum, sugar, fresh lime juice, sparkling water, and mint. The mint and lime juice should be fresh, and the rum should be of the anejo style. Many modern takes on mojitos add fruit juices like mango or pomegranate. Bitters can also be added, such as angostura bitters, to add an additional herbal sweetness.

The Cuba Libre is a quick to make and refreshing drink with an American influence. Made with just white rum, cola, and fresh lime juice poured over ice, it’s been enjoyed for decades as the perfect summer evening cocktail.

The daiquirí is known for being one of Hemingway’s favorite drinks in Cuba. Created in the cuban cocktail bar El Floridita, the daiquiri is a frozen drink. Made with white rum, sugar, fresh lime juice, and Maraschino Liqueur blended with ice, this too is perfect on hot afternoons and evenings. You may find you enjoy it as much as Hemingway did, who wrote of the drink in his novel “Islands in the Stream” like a man in love: “this frozen daiquirí, so well beaten as it is, looks like the sea where the wave falls away from the bow of a ship when she is doing thirty knots.”