Verona is an Italian city just 30 minutes outside of Lake Garda. It’s easy to see in a day and accessible by train. Founded by the Roman Empire on the banks of the Adige River in 89 C.E., the town flourished under Roman rule until the collapse of the empire in 476 A.D. Verona is a bastion of culture and history in northern Italy that demands your attention. Make a point to see all of the variety this city, a certified UNESCO World Heritage site, has to offer.

Here are the top sights you should see in order to really experience the town:

After the fall of the Roman Empire, ownership of Verona switched hands between the Visigoths and Lombards until 1260, when the della Scala family gained influence and brought stability to the region. It is during this time of Medieval-era prosperity that the legend of Romeo and Juliet is born.

The legend of the star-crossed lovers, made famous by the Shakespearian play eponymously titled Romeo and Juliet, takes place in Verona, and there are three “Shakespeare stops” you can make: Juliet’s House (Casa di Giulietta), Romeo’s House (Casa di Romeo), and Juliet’s Tomb at the Museum of the Frescos of Giovanni Battista Cavalcaselle. 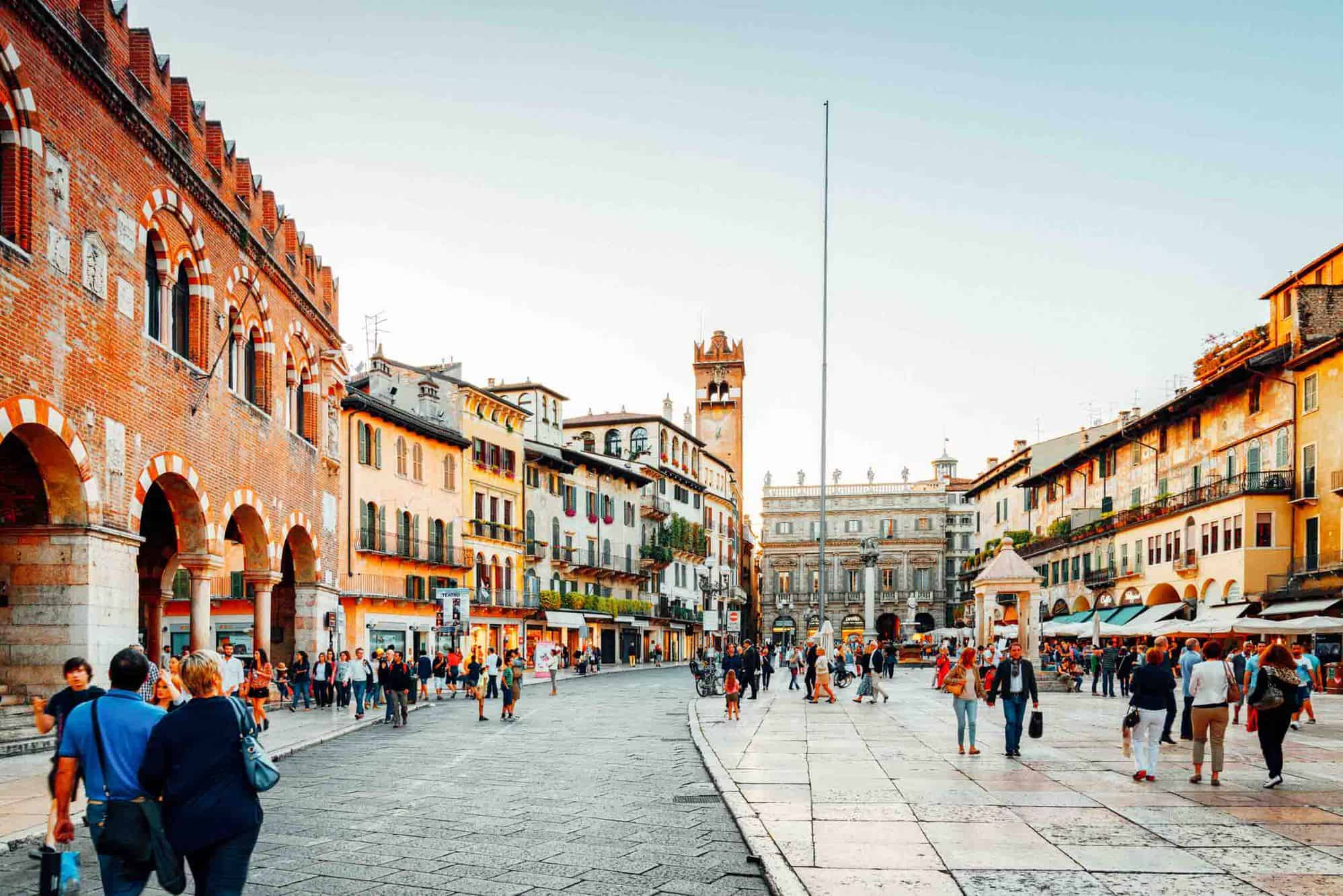 The main feature of Juliet’s House at Via Cappello 23 is the balcony, from which Romeo purportedly wooed the enamored young Capulet woman. Of course, there is more information on the house and Shakespearian tale inside the building for €4.

If you’re feeling particularly daring, you can take a risque photo touching the right breast of the nearby statue of Juliet as tradition holds that this brings good luck. If you’re feeling shy, perhaps you just kiss your lover in the courtyard.

Tradition also says that leaving a love note on the tunnel wall nearby brings good fortune, and members of the volunteer-based Juliet Club read and reply to thousands of missives creatively attached to the wall. When packing, it might be best to bring some paper, tape, and a pen or pencil to participate in the city’s cherished tradition. Make sure to grab some souvenirs of your visit at one of the nearby shops.

Far less popular but still notable is Romeo’s House, the rumored former residence of the Montague family is now owned by private citizens. It’s not open for viewing, but a plaque on the exterior commemorates Romeo’s role in the notorious tale.

Reportedly, Juliet’s tomb was formerly located in the Convent of Francesco al Corso’s garden until the 1930s. After centuries of vandalism and damage due to a tradition of absconding with a piece of the cemetery’s marble, the tomb was moved underneath the convent, but a bust of Shakespeare remains in the garden. The tomb can now be viewed as part of the Museum of the Frescos of Giovanni Battista Cavalcaselle.

Piazza delle Erbe started out as a square in the middle of Verona during Roman times, and it’s importance to the city’s functioning hasn’t waned since. The city in many ways has built up around the square, and it hosts shops, cafes, and restaurants, as well as the occasional farmer's market. A common practice for visitors is to grab coffee or dinner and people watch from the restaurant tables after shopping on Via Mazzini.

One of the appealing aspects of the square is the looming Torre del Gardello clock tower, built in 1370. The Baroque design and intricate frescos of the Casa dei Mazzanati and the Palazzo Maffei are revered by art historians and worth a look. Make sure to note the statue of a lion with wings holding the Bible on top of a colonnade in the center of the square - this is St. Mark’s lion (leone Marciano), a symbol of the Venetian Republic, of which Verona was once a part. A statue dedicated to the poet Roberto Tiberio Barbarani as well as a Gothic column known as Colonna del Mercato reside in the plaza.

Also of interest is the Madonna Verona Fountain, constructed in 1368 by the della Scala family and still watching over the comings and goings of Verona’s citizens and visitors to this day. The woman captured by the fountain’s statue is not the Virgin Mary, but the depiction of the spirit of Verona itself.

Sanctuary of the Madonna of Lourde, Verona

One of the more interesting facets of the square is that a whale rib is suspended from an arch leading between the Piazza delle Erbe and Piazza dei Signori. The arched walkway, known as the Arco della Costa, or “Arch of the Rib,” has sported the bone attached by a chain since the 1700s, and no one really knows its origin, especially since Verona isn’t exactly close to the seaside. It's rumored that the bone will fall upon the first innocent person to cross beneath it. This myth likely developed as the judges of the time used the walkway to avoid the “corruption” of the crowds below and pass from the court to their places of residence. If you do decide to pass underneath the bone, you can make your way to Piazza dei Signori to see the statue of Dante. Other sights in the piazza to take in include the Casa dei Mercanti, the Torre dei Lamberti, and the Palazzo del Commune.

The Roman Colosseum isn’t the only ancient amphitheater in Italy. Verona has its own — the Verona Arena. It plays host to multiple performances each year, but the most notable of these is the Arena di Opera festival, which takes place yearly from June to September. Shows offered in 2020 include La Traviata, Nabucco, and Aida.

Philharmonics, ballets, and concerts are also regularly performed within the arena walls, and tickets are available on the website. Check here to see the event schedule.