Sculpted by a glacier in the last ice age, the Rhône Valley in Southern France would be nothing without the remaining vestige of that glacier, the Rhône River. The river stretches down from the Alps for over 500 miles where it meets the Mediterranean Sea, and the cities around the river and in the valley have prospered for thousands of years due to these channels.

The Rhône Valley is home to ancient cities like Avignon, Lyon, Orange, Montélimar, and so many more, each with their own unique mixture of historical influences and with their own viticulture. It has long been a region for wine and continues to be today, with many visitors coming each year to taste Syrah in the North, Grenache in the South, and to explore the antiquity all around. With multiple UNESCO World Heritage Sites and thousands of years of civilization, the Rhône Valley is chock-full of historic places. Here are four you must see for yourself. 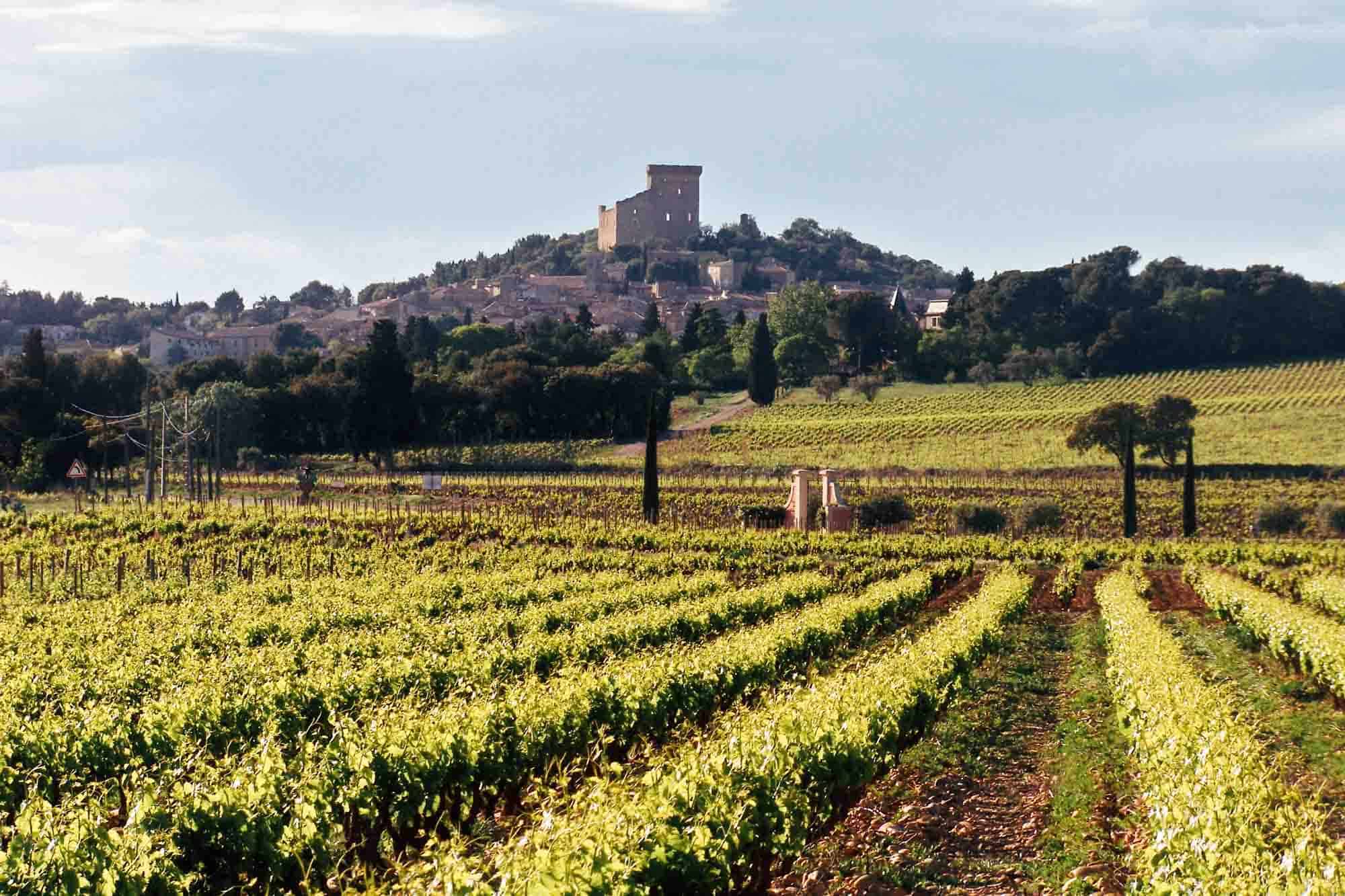 Meaning the “Pope’s new castle,” Châteauneuf-du-Pape describes three things: a small village of about 2,000, a French wine AOC, and the very wine that is produced in the appellation. What exactly is an AOC? It stands for “appellation d’origine contrôlée,” or “protected designation of origin,” and is a certification granted by the French government to protect and control certain geographical areas known to produce significant and delicious wines, honeys, cheeses, butters, and more, as well as the products themselves. In Southern France, Châteauneuf-du-Pape is one of the more famed AOCs, and is known for creating the “brooding” and harsh wine that some consider a true “wine-lovers wine.”

The history of this area’s viticulture is long and closely tied to papal influence, hence its name. In 1309, Pope Clement V changed the Papacy’s location from Rome to Avignon and built a summer palace 10 miles away in the village of Châteauneuf-du-Pape. Pope Clement V and succeeding popes disliked the unrefined local wine and therefore encouraged the advancement of viticulture in Avignon and surrounding areas, which has led to Châteauneuf-du-Pape’s wine achievements today.

However, it took many centuries and steps for this wine to mature from an idea of the Pope’s to today’s well-formed and protected wine. During the time of Pope John XXII, successor of Pope Clement V, the wine was called “Vin du Pape” or “Papal Wine.” By the 20th century, the name Châteauneuf-du-Pape had stuck, though there were new problems, such as questions about what defined the wine and claims of fraud. In 1923, disputes about Châteauneuf-du-Pape wine led to the formation of regulations that became the first ever AOC rules and AOC granted certification in France. Along with its name, bottles of Châteauneuf-du-Pape pay homage to its history, as many are embellished with the decorative papal tiara and keys.

What should you do and visit when in Châteauneuf-du-Pape? Taste the wine and visit the local vineyards and cellars, of course. The village is perfect to traverse on foot, winding your way through the streets amongst medieval architecture. Within minutes, you’ll find wine cellars and shops galore where you can sample Châteauneuf-du-Pape wine for yourself — discerning the fruit flavors of cherry and blueberry and taking in the violet aroma. Be warned that this may be a wine that grows on you, as it’s known for having a challenging nature. We’d also recommend a stop into the Brotte Wine Museum where you can view winemaking tools, learn an in-depth history of the AOC, tour the vineyard, and taste wine. If you’re visiting in August, make sure to attend the Fête de la Véraison, a three-day festival including a medieval dinner, market, music and dancing, as well as the opportunity to speak with local wine producers.

Fun Fact: Since 1954, the village of Châteauneuf-du-Pape has had an active law prohibiting flying saucers above its protected vineyards. 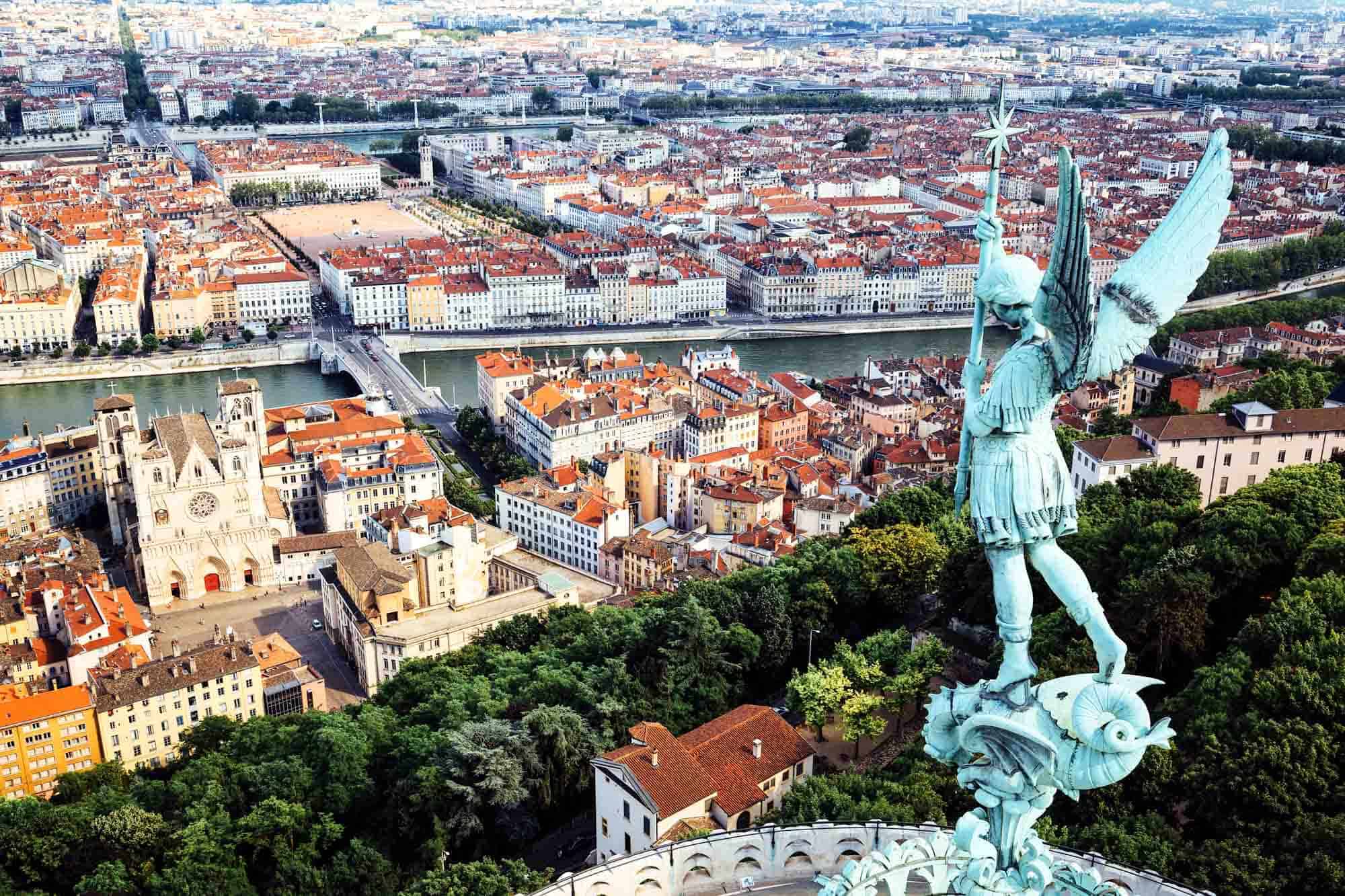 It would be pretty tricky to avoid historic sites and opportunities for architectural and cultural education in Lyon as people have urbanized it for two thousand years. In fact, many parts of the city have been registered as UNESCO World Heritage Sites, including the Roman district and Fourvière, the Presqu’île, and the Vieux Lyon.

Meaning “Old Lyon,” Vieux Lyon describes the vast Renaissance neighborhood of the city, which is divided into three distinct districts. The northern district of Saint-Paul was historically for the wealthy citizens and businesses. You’d find the clergy and aristocracy in the central district of Saint-Jean. And finally to the south, tradesmen and artisans called Saint-Georges their home.

Scattered throughout these three districts that make up Old Lyon, you’ll find dozens of historical gems to walk by and visit, like the Montée du Gourguillon, an ancient street ascending the Fourvière hill, or the three-doored Gothic St. Jean Cathedral built in the 14th century and seat to the Primate of Gaul (another name for the archbishop of Lyon).

Among many noteworthy architectural details in the Vieux Lyon are the traboules. These narrow passageways are famously attributed to Lyon, and cut through buildings to connect one street to the next. An astonishing four hundred traboules can be spotted in Old Lyon. 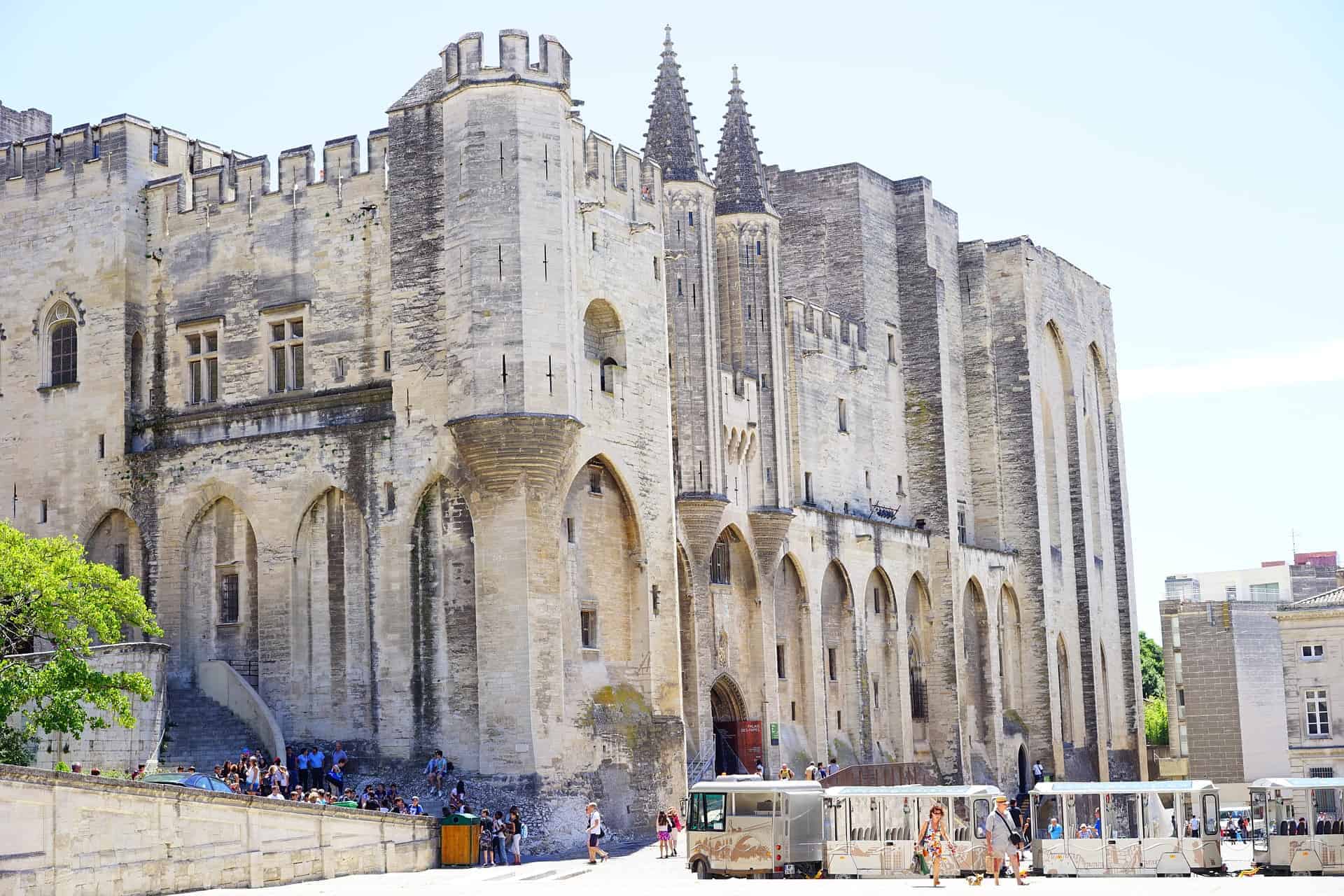 The Palais des Papes in Avignon.

The commune of Avignon on the Rhône river’s left bank has a fascinating history tied to the Avignon Papacy, and the city’s historic center holds many preserved sites that give residents and visitors a look into the past. The Avignon Cathedral and UNESCO World Heritage Site Pont d’Avignon are just a two of these points-of-interest, but another, the Palais des Papes, has particular significance and architectural grandeur.

Construction on the Palais de Papes began in 1335 and wasn’t completed for twenty years. Why did it take so long? Translating to the “Palace of the Popes,” the Palais de Papes is the largest Gothic-styled palace in France and all of Europe, with many estimating its size as four times larger than most Gothic cathedrals. Considering its magnitude, most regard its twenty-year build as lightning fast. Like the Pont d’Avignon, the Palais de Papes is also a registered UNESCO World Heritage Site and has been since 1995.

While learning about the nine popes who called Avignon home in the 12th century, visitors to the palace can tour 25 rooms and easily imagine the daily lives of those who called it home. The Grande Audience Hall, ceremonial rooms like the great Clementine Chapel, and even the Papal Chamber (the pope’s private apartment), are open to the public. A striking feature of the palace are the many frescoes dispersed throughout, created by the Italian artist Matteo Giovannetti. These frescoes depict portraits, natural landscapes, and scenes of hunting and fishing.

Fun fact: The Palais de Papes was not always one building, but rather two connected together. It’s made up of Pope Benedict XII’s older palace, “Palais Vieux,” and Pope Clement VI’s newer one, “Palais Neuf.” 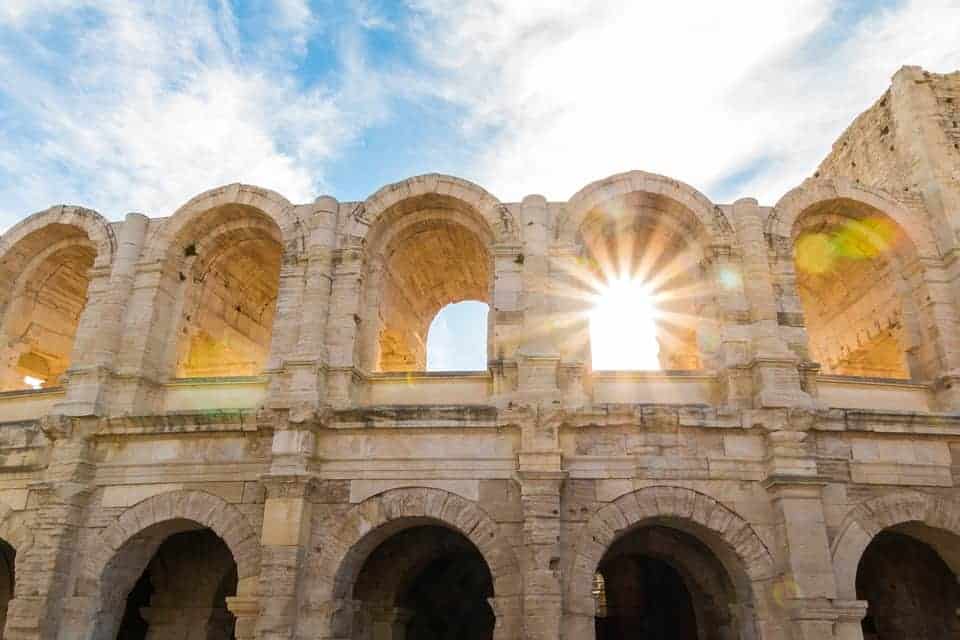 The Roman and Romanesque Monuments are a cluster of eight historic monuments in Arles’ city center that have been registered as a UNESCO World Heritage Site since the 1980s. Any one of them would be an exciting taste of history, but together they give any traveler to Arles a feast. Here are our top four favorites that we don’t think you should skip.

Built in 90 AD, the Arles Amphitheatre design was inspired by the Colosseum’s arches, galleries, and staircases. It could hold 20,000 Roman citizens when viewing any number of dramatic displays, from chariot races to battles.

Found under the Chapel of the Jesuit College and the City Hall, the Cryptoporticus is an underground structure built by the Greeks in the 1st century BC. The structure is made up of three galleries in the shape of a horseshoe, and supported by fifty pillars. The Cryptoporticus in Arles is believed to have been a quarters for slaves.

Just outside the walls of Arles’ Old Town, the Alyscamps is a vast Roman necropolis or cemetery. The Alyscamps functioned as the city’s burial ground for 1,500 years, and you can even find mentions of it in famous works of literature, like Dante’s Inferno.

This Romanesque-style church dates back to the 11th century and the adjacent cloister is from the 12th century. An interesting aspect of the Church of St. Trophime is the mixture of Romanesque details, like bas-relief sculptures, with Gothic-styled sculptures in the cloister.