Southern France’s Rhône Valley is known the world over for its production of high-quality red, white, and rosé wines. Established during the last Ice Age, the unique landscape that makes up the highly regarded region was formed when the Rhône Glacier carved its way south through France to create the Rhône River. Spanning a total of 505 miles from its headwaters in the Swiss Alps through France and into the Mediterranean, vineyards in this region — which date back as far as the 4th century BC — can be found on both sides of the river between Vienne and Avignon and are divided into two sub-regions — the Northern Rhône and the Southern Rhône. However, while the Northern Rhône and the Southern Rhône have the Rhône River in common, the two sub-regions are distinctly different, each with their own unique geographies, climates, soils, and grape varieties.

The Northern Rhône — characterized by its continental climate, steep hillsides, and terraced vineyards — is comprised of eight different Appellation d’Origine Contrôlées (AOC), each distinguished by their own unique and individual qualities. 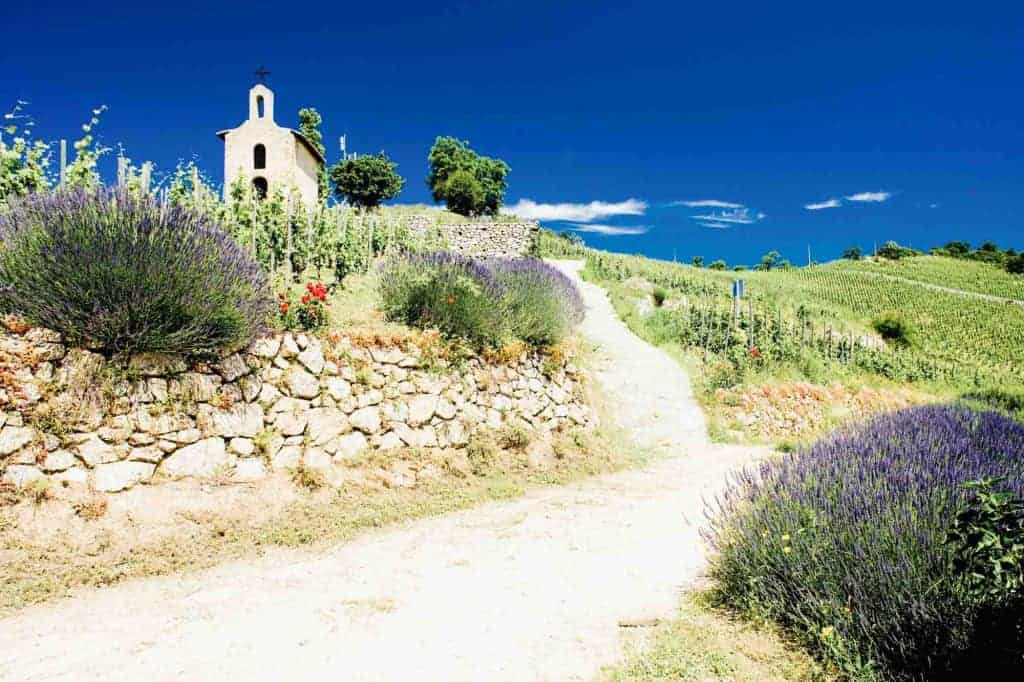 Sometimes called the “roasted slope,” Côtie Rôtie is one of the Northern Rhone’s most celebrated appellations. Defined by its steep, sloped vineyards and clay-based soils, Syrahs produced in Côte Rôtie are famously known for being bold and smoky in flavor with notes of raspberry and black currant.

Another significant appellation, Condrieu is the largest white wine appellation in the Northern Rhône, and produces luxurious wines made from 100-percent Viognier.

A small, single-producer appellation, Château-Grillet — owned by a winery of the same name — is a 9.4-acre appellation that produces Viognier-only white wines. Notes of starfruit, white peach, butterscotch, and gunpowder characterize the wines produced by Château-Grillet.

Syrah, Marsanne, and Rousanne vines span the 2,273-acre Saint-Joseph appellation. With wines that range in flavor and price, this Northern Rhône appellation offers something for every type of wine drinker.

This French wine Appellation d’Origine Contrôlée is famous for its red Syrahs, made from vines dating back as far as 500 BC. However, while Syrah is the showstopper in Hermitage, white blends made from Marsanne and Rousanne grapes shouldn’t be overlooked. With its wines repeatedly ranking among the best in the Northern Rhône, it’s no surprise wines from this appellation range in price from $60 to $350.

Oenophiles in search of bold, tannic Syrahs needn’t look further than the Northern Rhône’s Cornas appellation. Here, wines are characterized by flavors of blackberry, pepper, charcoal, and smoke. Due to the intensity of the tannins in these wines, it often is recommended to let them age up to 10 years, giving the tannins time to soften.

The southernmost appellation of the Northern Rhône, Saine-Péray is known for its production of medium- to full-bodied white wines made from 100-percent Marsanne and Roussanne grapes. Defined by floral notes and balanced acidity, one-third of all wines produced in this tiny valley (185 acres) are sparkling.

With its Mediterranean climate and famous Mistral Wind, the Southern Rhône is much different than its counterpart to the north. Here, the summers are long, the winters are mild, and Grenache reigns supreme.

Wines produced in the Southern Rhône vary in style, quality, and price, and run the gamut from red to white, with the most widely produced wines being blends made from Grenache, Syrah, and Mourvèdre grapes.

In addition to these three varietals, other popular grapes grown in the Southern Rhône include Cinsault, Counoise, Grenache Blanc, Marsanne, Carignan, Roussanne, Bourboulenc, and Clairette, among others.

The Southern Rhône is a significant wine producing region. With a multitude of red, white, and rosé wines produced here, the Southern Rhône produces about 95 percent of all wines from the Rhône Valley.

Accounting for two-thirds of all wine produced in the Rhône Valley, Côtes du Rhône is a general appellation that is located partly in the Northern Rhône and mostly in the Southern Rhône. A major producer of full-bodied reds made from primarily Gigondas grapes, this vast AOC is the largest in the region.

A red-only appellation, Vinsobres is known for its dark, fruity, and highly tannic wines. Reds produced in Vinsobres are made exclusively from Grenache, Syrah, and Mourvedre grapes.

A moderately prestigious appellation, the most celebrated wines from Gigondas are well-aged reds. In addition to red, a number of rosés carry the Gigondas appellation, as well. However, it’s important to note that no white wine has been produced in Gigondas since the 16th century.

Primarily a red wine producing region, Grenache dominant wines paint the viticulture landscape of Vacqueryras AOC. Situated along the banks of the River Ouvèze, Vacqueryras shares a border with Gigondas, another appellation of the Southern Rhône.

A historically significant wine producing region, winemaking in Lirac dates back more than two thousand years. A producer of aromatic reds, refreshing whites, and sumptuous rosés, the usage of the term ‘Côte du Rhône’ got its start in Lirac after winemakers started printing it on barrels for export.

A historic region home to vineyards dating back to the 5th century BC, Tavel — located just south of Lirac — is known for its refreshing rosé wines. So much in fact that the appellation is also called “Le Roi des Rosés,” which translates in English to “The King of Roses.”