No one questions why the Rhône Valley in Southern France is so popular — the reasons seem nearly endless. Visitors come every year to learn about the region’s long history; to view UNESCO World Heritage sites, like the Pont d’Avignon and the Roman and Romanesque Monuments in Arles; and to take in the area’s natural surroundings, like the Rhône River, plentiful vineyards, and mountain views. Even more, the Rhône Valley is a place to treat your taste buds.

The gastronomic offerings from this region have been honed for hundreds of years, with influences from Mediterranean flavors and even ingredients from Africa, like oil and brine and exotic wines from Tunisia. Throughout the Rhône Valley, there are many cities and small towns that have gifted the region with their own local specialities and delicious meals, like poultry dishes from Drôme, delicate candies called Papelines from Avignon, and crunchy nutty nougat from Montélimar, to name a few.

Yet of all the cities, Lyon reigns as the most important influencer and king of fine dining. Considered a global food capital, visitors can find more than a thousand restaurants within Lyon, making it one of the most restaurant-rich cities in all of France. Of those thousand, a surprising twenty have received Michelin stars. The cuisine of Lyon is characterized by the use of simple ingredients that are of the highest quality, as well as the idea of home cooking as gourmet, known as the cuisine des mères (the mother’s cooking). The impact of Lyonnaise cuisine affects the entire region and is a must-experience for any food-loving traveler.

The Rhône Valley is one mouthwatering region, considering all these food options and with the addition of local wines like Grenache, Syrah, and Châteauneuf-du-Pape to perfectly pair with every meal and dessert. Read on to learn more about the Rhône Valley’s most iconic gastronomic contributions. 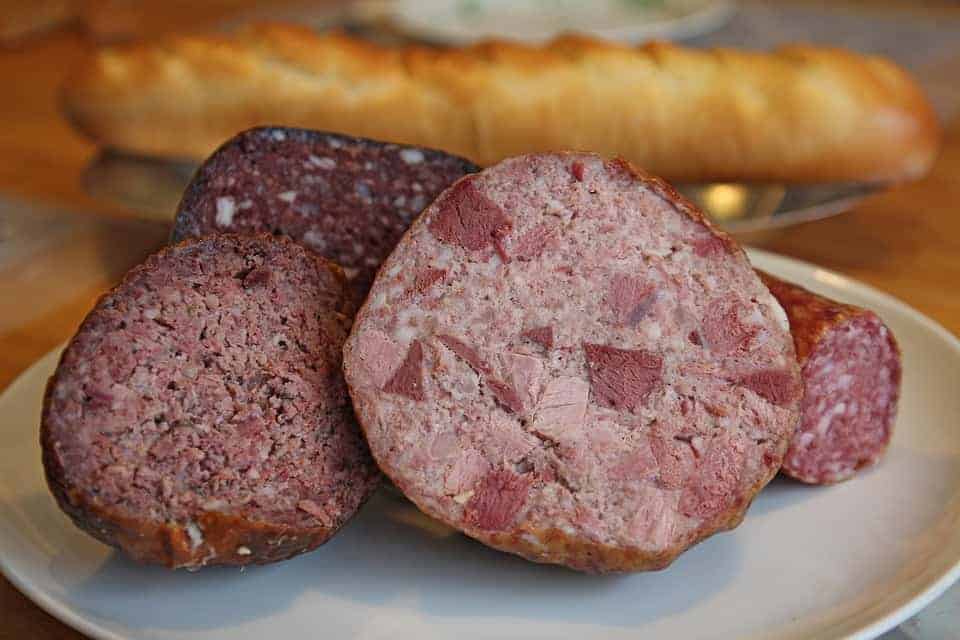 Saucisson de Lyon, a specialty sausage of Lyon, France, made from minced beef and diced bacon.

A sampling of foods from Lyon would be incomplete without sausage — actually, a great many types of sausages. We suggest starting with Rosette Lyonnaise, which is the most well known. It’s a dried, rose-colored, cured pork sausage that’s eaten sliced, in chunks, or cooked to enjoy hot. Rosette Lyonnaise is such a staple you’ll be able to find it in any local meat shop or charcuterie. Next is Saucisson de Lyon, which you can tell by the name is a specialty of the city. This sausage is larger in circumference than the Rosette and is made of minced beef and diced bacon. We don’t think it’s going anywhere, as it’s been popular in the region since the 18th century. If you’re interested in something a little more adventurous and special, there’s Cervelas de Lyon. This sausage is made from minced pork and pistachios (although truffles are also sometimes used), and it’s sold uncooked. To eat, simply boil and enjoy the salty, nutty meat. Cervelas’ name comes from the Latin cerebrum for brain, as the sausage used to be made solely from pork brains.

Throughout France, many foods, wine, and agricultural products are protected by specific designations. In the department of Drôme, for example, there is a rare Appellation d’Origine Contrôlée (guaranteed designation of origin) status for a particular kind of poultry. La Pintadeau de la Drôme — or guinea fowls from Drôme — received this protected certification in 1969. The fowl are bluish-gray with white spots and, while it can’t be confirmed, legend has it that these guinea fowl have been raised in Drôme since the time of Hannibal. In the Rhône Valley, this guinea fowl is often baked with wild mushrooms and enjoyed as a homey and warming meal. 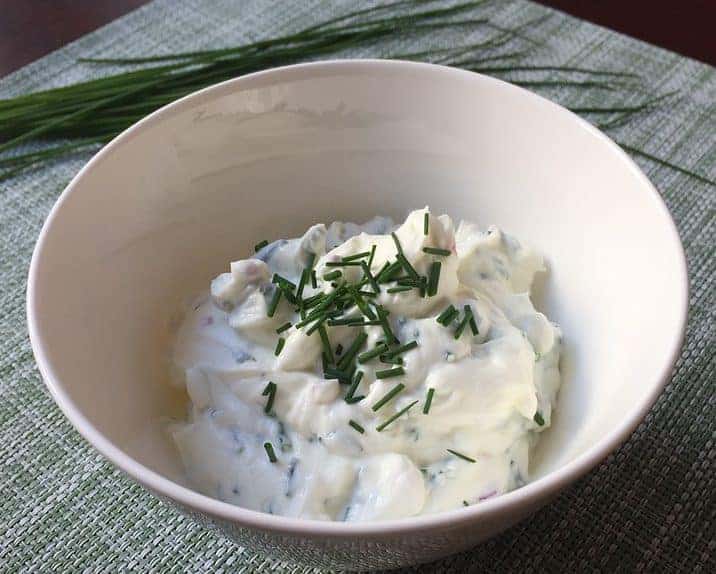 Cervelle de Canut is a cheese spread from Lyon, France, named after the silk workers of 19th-century who consumed it regularly as part of their lunches.

Any wonderfully toasted French baguette would be made better with the Lyonnaise cheese spread called Cervelle de Canut. Made with fromage blanc as the base, it’s then whipped with olive oil and vinegar and seasoned further with shallots, crushed garlic, and herbs like chervil, parsley, and tarragon. Cervelle de Canut literally means “the silk worker’s brain” because silk weavers in 19th-century Lyon were said to have regularly eaten this as part of their lunches. You can learn how to make it yourself here, though nothing would beat eating Cervelle de Canut at an outdoor cafe in Old Lyon.

Tablier de Sapeur is a delicious entree speciality of Lyon, comprised of fried beef stomach called tripe. To prepare the dish, the tripe is boiled in a flavorful broth called court-bouillon, then soaked in white wine, slathered with breadcrumbs, and fried, making the first bite salty and crunchy. In a typical serving of Tablier de Sapeur, you’ll find the meat topped with Sauce Gribiche, which is a cold mayonnaise and hard-boiled egg salad, as well as a potato side. Tablier de Sapeur can be enjoyed at many restaurants in the Rhône Valley, but especially at one of the twenty certified bouchons. Bouchons are a kind of restaurant in Lyon that specialize in local Lyonnaise cuisine, which generally tends to be on the heavier side. Kind of like the French version of gourmet pub food.

We loved learning that there is indeed a French name for someone who makes nougat — a nougatier of course! And if nougat is what you’re craving, there’s no better place than Montélimar, the second-largest town in the Drôme department. Nougat has been produced in France for centuries, ever since it was brought over from its origin in the Middle East. Walnuts are the traditional nut in nougat, but that differs in the speciality from Montélimar. Nougat de Montelimar is made from almonds, honey, and an egg white mousse. It’s chewy, sweet, crunchy, and unforgettable. This nougat speciality was first made in the 18th century when an agronomist successfully grew almond trees and replaced the walnuts in his homemade nougat with those almonds. The agronomist’s seemingly simple exchange made a huge difference and has set up Montélimar as a destination for confectionary treats.

We think a package of Coussin de Lyon or “Cushions of Lyon” is one of the best souvenir ideas to bring back to your loved ones after a trip through the Rhône Valley. Since the 1960s, these sweets have been made by the chocolatier Voisin. Green marzipan is filled with chocolate ganache filling and flavored with the orange liqueur curacao. Being an invention of Voisin, it is the only producer of these highly popular candies, making 85 tons each year.

How did they get their name? The story is actually a bit macabre, but the sentiment is sweet. It all goes back to 1643 during the treacherous plague epidemic. The then leader of Lyon organized a parade throughout the city with the goal of asking the Virgin Mary for her help in protecting the city against sickness. As part of the procession, townspeople carried a seven-pound candle and a golden crown resting on a silk cushion. It was this piece of Lyon’s history that inspired Voisin to create the chocolates in the shape of cushions.

Having already tasted the sugary cushions of Lyon, we’re guessing you’d be ready for even more dessert goodness. The Papelines d’Avignon won’t disappoint. Also created in the 1960s, these chocolates are shaped like the flowerhead of a thistle. It gets even better and quite interesting because the chocolate is filled with a liqueur called Origan du Comtat, containing a base flavor of oregano and an additional sixty plants from Mont Ventoux. One bite of the Papelines is a chocolate-y herbal dream.