With its 45 appellations and wealth of vineyards producing syrah, grenache, viognier, and marsanne grapes just to name a few, the Rhône Valley is world famous for wine, but it’s also a region filled with history and architecture, elaborate medieval villages, and white-stone castles. Like the vineyards that grow in the fertile soil flanking each side of the Rhône River, villages and cities also follow the waterway through the valley and have been settled for thousands of years.

While you probably have heard of many of the noteworthy and travel-friendly cities in the region — Lyon, Vienne, Valence, Orange, Avignon — there are many hidden architectural treasures in each of these, as well as a host of smaller villages tucked into hillsides.

Why are there so many ancient and medieval relics remaining in this area? The answer may lie in just how exceptionally rich the human history of the Rhône Valley is, dating back at least 30,000 years. Early humans settled the area and left their imprint in the caves of the Rhône Valley. The most famous of these is the Chauvet-Pont-d’Arc Cave, located in the Ardeche department near the natural land bridge called Pont d’Arc. Inside this cave are prehistoric paintings of deer, lions, rhinos, and other animals, all dating back 30,000 years.

But beyond prehistoric humans, this area has seen the control of the Celts in the sixth century BC, then the hands of Hannibal and the Carthaginians, and of course the control of the Roman Empire. Romans inhabited the Rhône Valley for many centuries, creating roads, aqueducts, and buildings and implementing concrete during their rule. Following the fall of the Roman Empire, we saw the rise of power in the French nobility during the Middle Ages, also known as the medieval period. During this time, the Frankish tribes united and were ruled by one monarch, Clovis I, and there was a lot of importance put on the building of gorgeous churches, monasteries, and other religious buildings, as well as castles for nobility. It’s these wonderful buildings from the medieval period that so many want to see when traveling to the Rhône Valley. Read on to find our list of four villages that highlight medieval charm, so you can make the most of your next trip to the region. 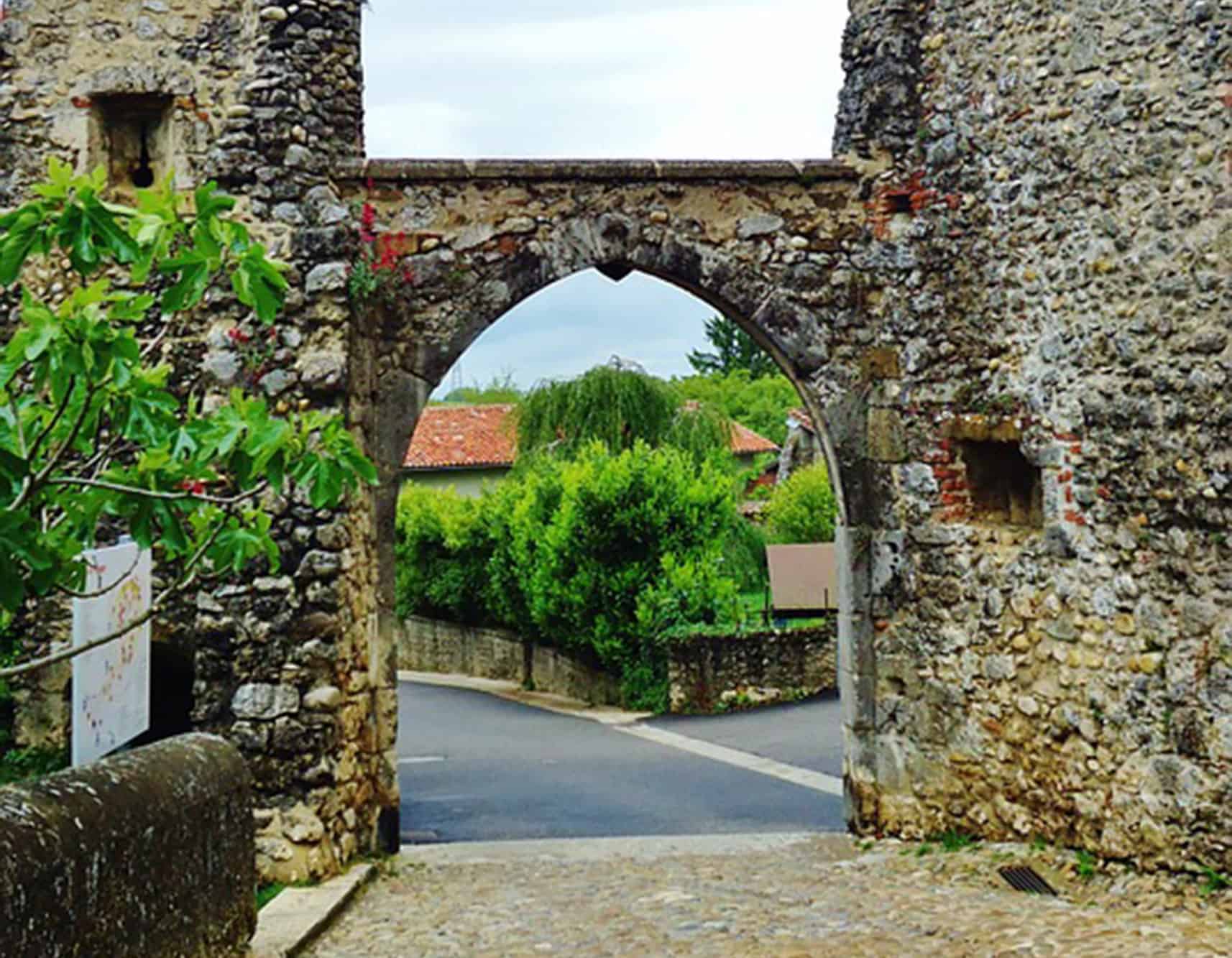 Just north of the city of Lyon, Perouges is a small commune of only 100 citizens that is nearly out of a fairytale or movie set. This medieval walled town is situated on a hill with views of the valley and Ain River, and has been barely modernized. You’ll still come across cobblestone streets, homes from past centuries, and evidence of its spectacular wine-making and linen-weaving histories. Perouges is so authentically and architecturally medieval that it has actually been used for filming features such as Les Trois Mousquetaires (1961), or The Three Musketeers.

From the instant you enter Perouges, it’s theater. There are only two entrances, “Porte d’en Bas” (bottom door) and “Porte d’en Haut” (upper door), into the city. Upon entering, you expect to find knights and princesses. In the center of the village is the square called La Place de la Halle. During the French Revolution, a Linden tree was planted here, and the same tree remains to this day. Off the square, visitors will find one of the oldest inns in France, Hostellerie du Vieux Perouges, as well as a variety of gift shops, restaurants, wine shops, and more. If you find yourself amid these historic walls, we suggest you try the local dish Galette de Pérouges, which is lovingly described as warm sugar pizza. Who wouldn’t want a taste of that?

Located south of Montélimar, La Garde-Adhemar offers a gorgeous view of the Vivarais Mountains and the expansive Rhône Valley. Many consider La Garde-Adhemar to be one of the most beautiful of France’s small villages. Perhaps it’s because of the white stones which make up much of this village, its ramparts, houses, and castle ruins. Or maybe because it’s pedestrian-only, which forces visitors to slow down and take in each detail of the ancient buildings.

In La Garde-Adhemar, you’ll find many architectural monuments and ruins worth touring, including the Church of Saint Michel. This church is a prime example of Romanesque architecture and any architectural devotee or novice will enjoy viewing its octagonal clock tower with 360 degree views of the Rhône Valley. While in La Garde-Adhemar, you also can explore a beautiful garden called Jardin des Herbes, and take in the scents of provencal herbs, plants, and flowers. 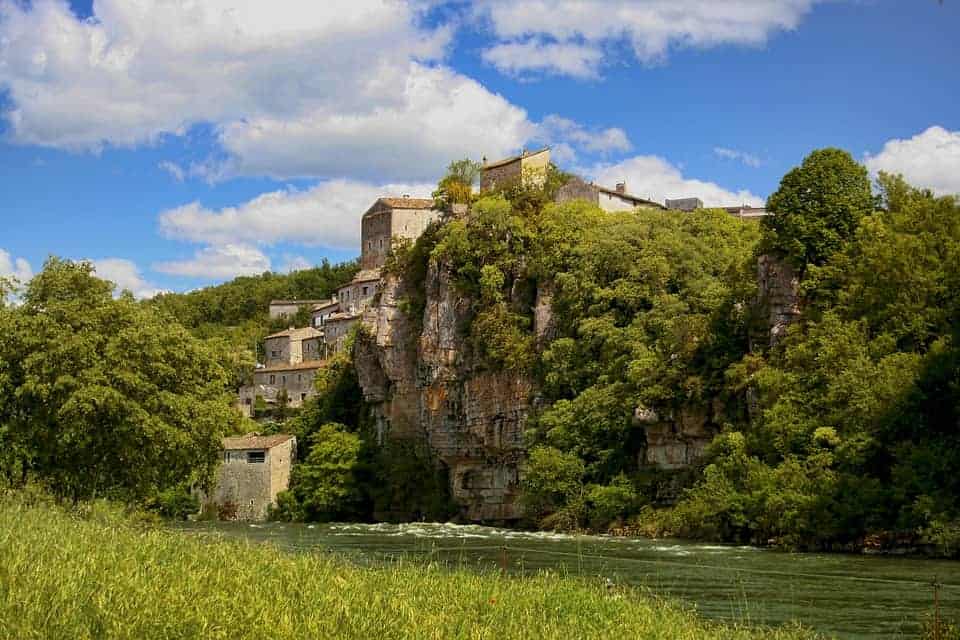 Few things are more picturesque than a medieval village perched on a clifftop. This is exactly the description of Balazuc. Here you’ll wind your way through a maze of streets, under stone arches, and past the old fortress that the historic Lords of Balazuc called home. Of the many architectural attractions in the village, it’s important to point out the 11th century castle ruins as well as the Church of Saint Madeleine, also from the 11th century. The church can be toured and also houses art exhibitions and concerts in warm months — a brilliant melding of history and creative innovation.

It may enhance your visit to Balazuc to know the history goes far beyond Romanesque architecture and industries from the Middle Ages. Near Balazuc, 50,000-year-old evidence has been found of Neanderthals hunting ibex, a kind of wild goat in the area.

If you want to explore Le Poët-Laval, you’ll have to do so on foot, but we promise it’s worth the stroll. After parking, you’ll enter the city on a steep path, looking up at the grayish stone walls of the fortified city. This village in the Jabron Valley, just 12 miles from Montélimar, has aimed to preserve much of its special architecture including the castle, ramparts, and the remains of the Chapel of Saint Jean des Commandeurs from the 12th century.

Upon entering, you won’t be disappointed by any modern buildings breaking the illusion that you’ve stepped back in time. Don’t go looking for roads, as the pathways making up the city are narrow and for pedestrians only. The history of this village dates back 900 years to the time of the Hospitaliers de Saint-Jean de Jerusalem (later the Order of Malta), a medieval and early modern Catholic military order. You’ll find examples of their influence around every corner and in every cobblestone.