Milan is the second-most populated city in Italy, located near Lake Garda. The capital of the Western Roman Empire in previous centuries, the city had an artistic boom during the Italian Renaissance and is now one of four fashion capitals in the world.

Since a day trip to Milan from Lake Garda is not far away, it’s a perfect excuse to see the art and history of Rome’s industrial capital.

A very walkable city with an accessible transportation system, seeing Milan’s highlights in a day is definitely doable (and don’t forget to stop by the famed celebrity enclave of Lake Como nearby too). Here’s our shortlist of what to see during a day in Milan:

The Milan Cathedral is in the central square of the city, Piazza del Duomo. It is the fifth-largest church in the world, as well as the largest church in Italy. The gothic structure, dedicated to St. Mary, took six centuries to complete and hosts the largest musical organ in Italy — a five-manual, 225-rank pipe organ.

Praised for artistry by American writer Mark Twain and criticized for gaudiness by English playwright Oscar Wilde, the cathedral hosts many carvings and gargoyles carved into the doors and walls. Be sure to examine the carvings around the main gate. There appears to be a dinosaur depicted in bas-relief on the right side of the entry.

Milan has a long association with reptiles, including dragons and giant snakes known as “biscones,” so it’s not surprising that reptiles are featured on the wall, but the origin of this particular dinosaur is a mystery. One theory is that the dinosaur records the “birth” of a fictional creature in the 1100s named Tarantasio that lived and died 200 years later in a Milanese swamp.

The carvings are available for viewing at any time of day, but entering the cathedral is only available from 8:00 a.m. until 7:00 p.m. and costs €3.

If you have a more macabre sensibility, the San Bernardino ossuary is a short walk from the cathedral and dates back to 1210, so be sure to stop by there for some historical insight to Milan.

Another church to worth visiting is Chiesa di San Maurizio al Monastero Maggiore, known for its stunning interior design. Make sure to take a look inside and marvel at the craftsmanship. The entrance to the church is free. Be sure to wear clothes that cover from your shoulders to your knees when visiting religious sites. 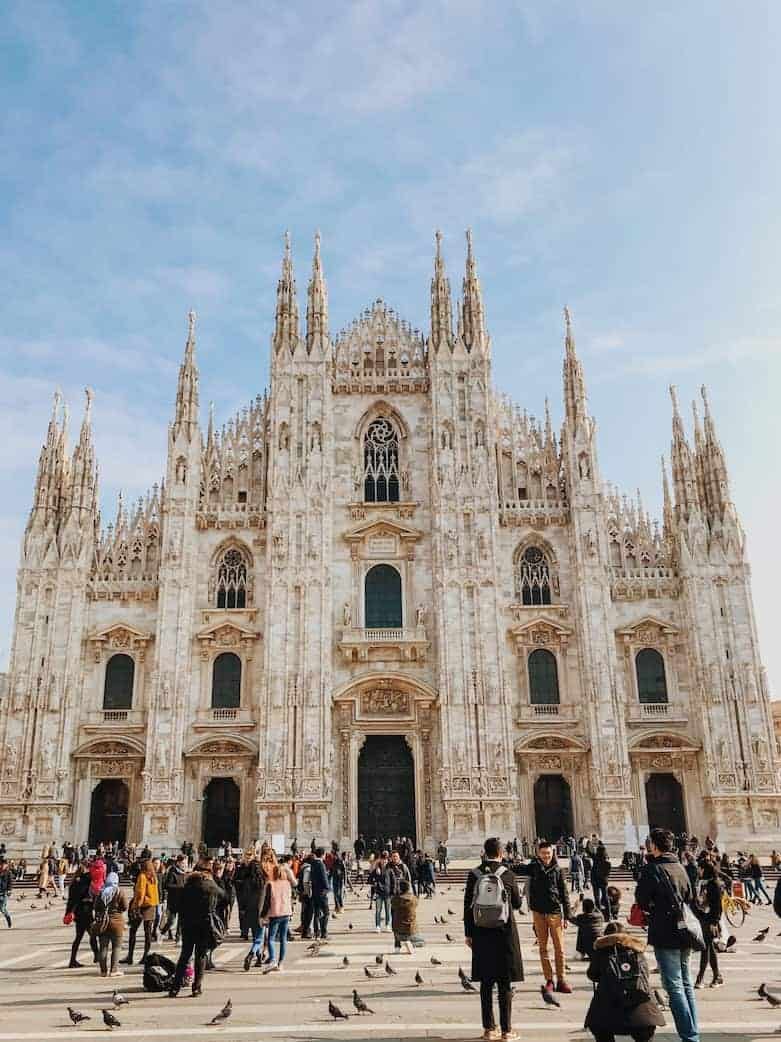 Milan is the fashion capital of Italy, and the Galleria Vittorio Emanuele II is the perfect place to get your shopping fix. Built in 1861 and named after Italy’s first king, the Galleria is Italy’s oldest functioning shopping mall.

The building is a double arcade that’s four stories tall and hosts a roof made of glass and iron. Designed by Giuseppe Mengoni, the Galleria has earned the nickname “il salotto di Milano,” or “Milan’s drawing-room,” as it’s a hub for locals and tourists to meet up. Some high-end international brand designers with shops here are Louis Vuitton, Versace, Gucci, and Prada.

Another great street for boutiques and shopping is Via Montenapoleone in the high-end “quadrilatero della moda” or “fashion square.” It’s especially good for those interested in celebrity sightings and fast cars as it is Europe’s most expensive street.

Sforza Castle, or “Castello Sforzesco,” was the home of the Sforzas, the ruling family of Milan during the Italian Renaissance.

Constructed in the 1400s on fortress ruins by Francesco Sforza, the citadel now serves as an art museum and boasts some impressive gardens.

Sempione Park or “Parco Sempione,” is right next to the castle and is worth a stroll. On the edge of the park is Sempione Gate or “Porta Sempione.” It’s the city gate leading into Milan marked by an arch known as the Arch of Peace or “Arco della Pace.”

There is also a design and art museum in Sempione Park to experience, known as the Palazzo dell’Arte. At the time of publication, La Triennale de Milano art expo is the current exhibition.

The pedestrian street Via Dante is nearby and worth exploring. The Piccolo Theater sits on the street, and the architecture is something to behold. Take it all in while shopping or grabbing lunch from one of the many notable eateries. 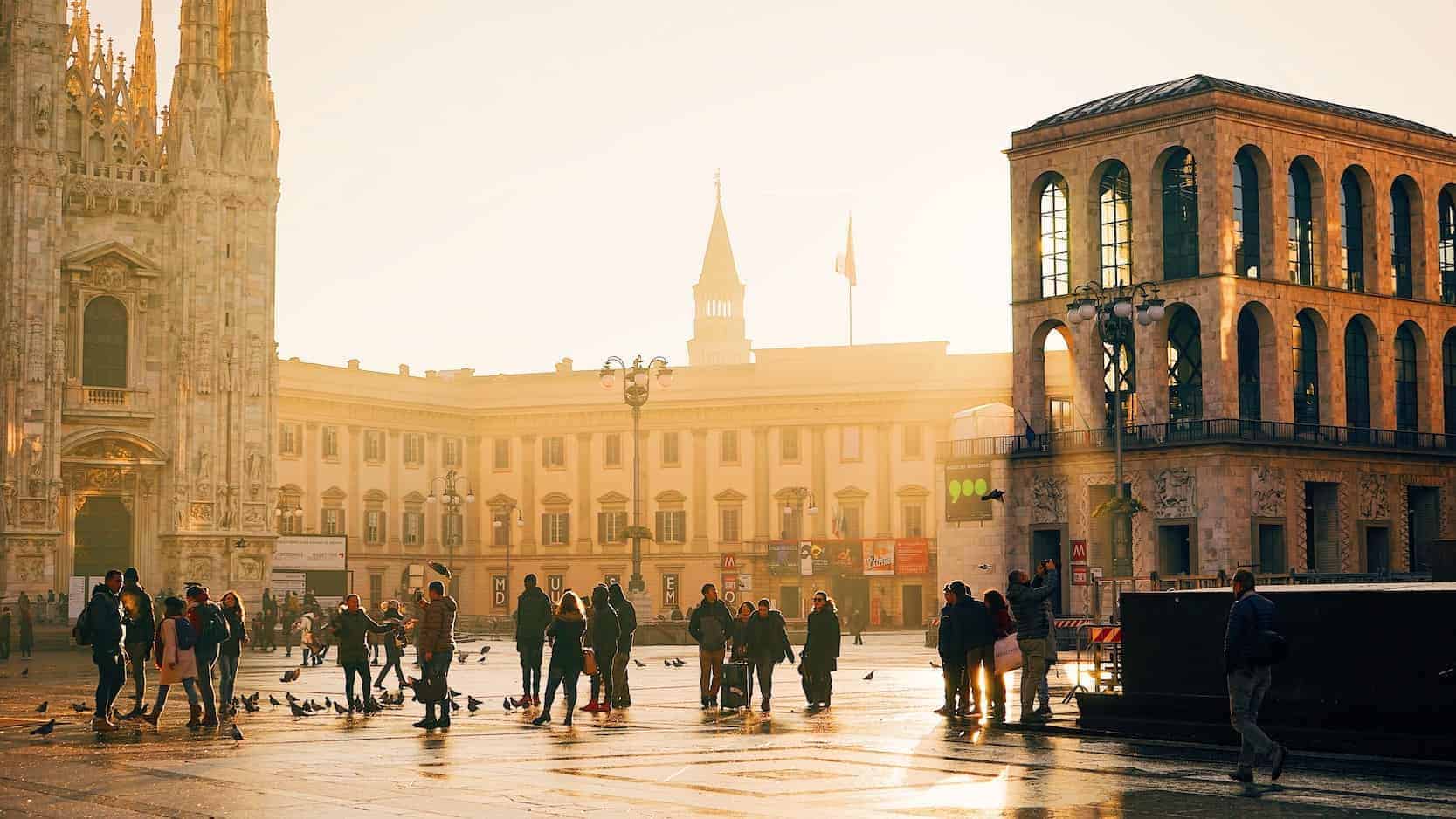 This stop is why many tourists come to Milan. “The Last Supper” is a mural painting completed by famed polymath Leonardo da Vinci in the late 1490s. The mural depicts the final meal between Jesus and the Twelve Apostles, the moment after Jesus told the apostles one of them would betray him.

It’s currently housed at the Convent of Santa Maria delle Grazie, the establishment da Vinci created the piece for as part of extensive renovations in the 1400s. It’s housed in the dining hall. Book tickets online very far in advance as they’re usually sold out close to the date.

Some architectural walking tours have the ability to skip the line as part of the tour, so be sure to check with your Experi Travel Director to consider that option when booking.

A monument to Leonardo da Vinci is in the Piazza della Scala, which plays host to Milan’s city hall, theater, opera museum, a bank, and the entrance to Palazzo Beltrami and the Galleria Vittorio della Emanuele II.

The Brera Art District in Milan is a hip, bohemian enclave for artists and art enthusiasts alike.

Often referred to as the “Milanese Montmartre,” the Brera plays host to the Brera Art Gallery, Pinacoteca di Brera (an art gallery in a former monastery), and the Brera Academy of Fine Arts.

The area also boasts a national library, observatory, and botanical garden. Wander the streets looking at boutiques and eating at appealing restaurants. The wide selection of shopping, cafes, and bars will be more than enough to keep you occupied. Aperol spritzes are popular Italian cocktails to sip here.

The Navigli District in Milan boasts many canals and is also a great arts-and-dining district to peruse. Much of the nightlife is found here and shopping opportunities abound.