Italy and pasta go hand in hand. Ribbons of pappardelle from Tuscany, al dente farfalle from Lombardy, and dumpling-like tortellini from Bologna all are well-known and loved varieties. With each region in the country touting its own take on how best to extrude, stamp, and stuff this universal delight, Italy boasts approximately 350 different pasta varieties in total, including one of our personal favorites: orecchiette from Puglia.

Made using simple ingredients of durum wheat flour and water, orecchiette is a quintessential dish from Puglia with a history dating back hundred of years. One of the oldest pastas from Italy, orecchiette’s exact origins remain a bit unclear. Some historians argue that the pasta was brought to Italy by the Angevins, a noble family that ruled Puglia and Basilicata during the 13th century, while others claim it emerged in the Bari area of Puglia between the 12th and 13th century and was derived from a traditional Jewish recipe. Regardless of this debate, experts are in agreement when it comes to one thing, and that’s the important role this simple pasta has played in influencing the regional cuisine. 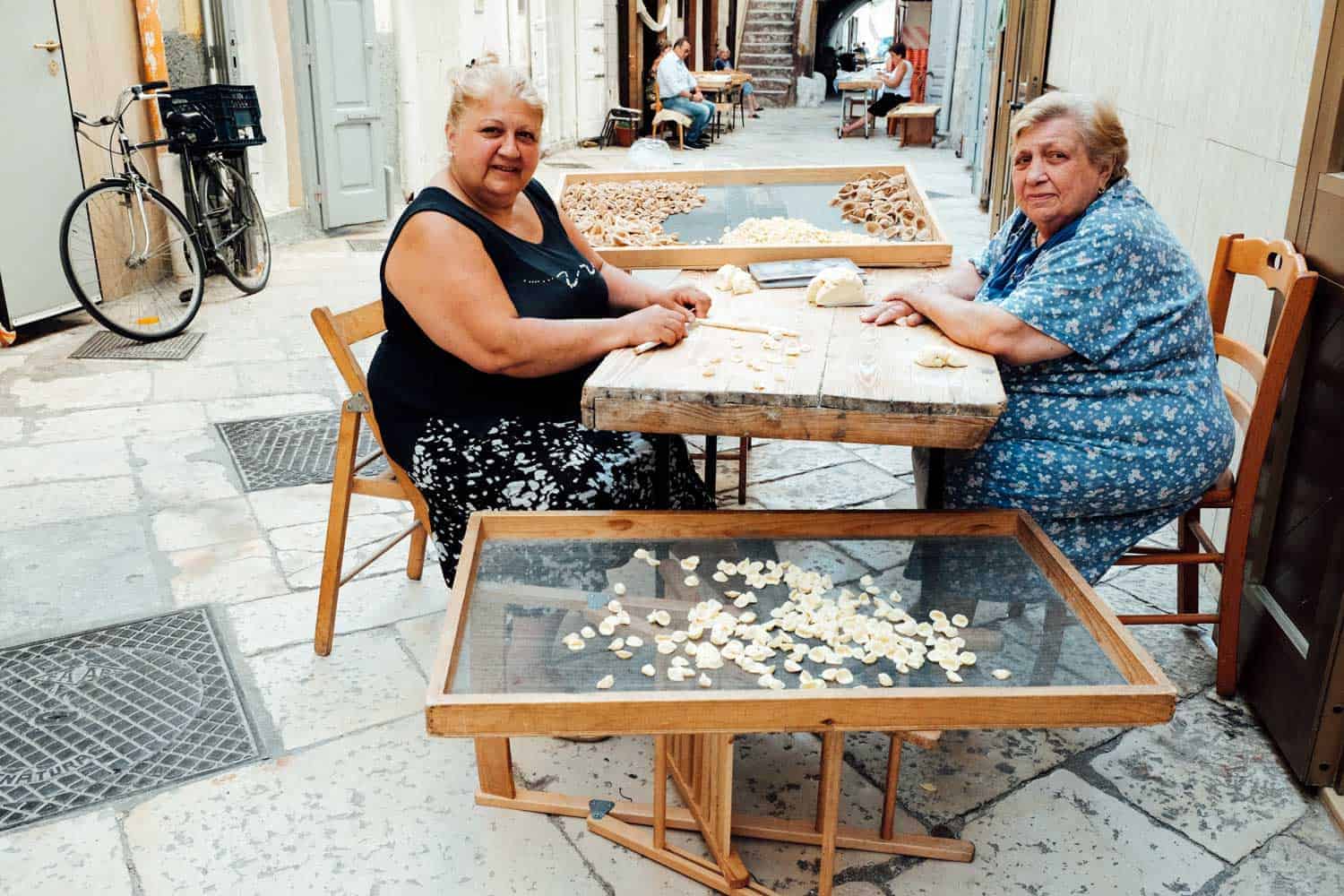 Orecchiette pasta being made by hand in Italy.

Formed by flattening eggless-dough by hand to form small cup-shaped morsels of pasta, orecchiette gets its name directly from its shape, which translates in English to “little ears.” Orecchiette’s unique shape lends itself well for transporting flavorful sauces from plate to mouth. Authentic orecchiette is most famously served as a dish called orecchiette con cime di rapa. This traditional dish from Puglia is made by combining orecchiette with a sauce made from cime di rapa (turnip tops), garlic, and olive oil. Alternately, broccoli rabe can be substituted for the turnip tops. The slight bitterness of the greens in this dish make it a perfect pairing for a robust red wine like Susamniello or Negroamaro-Cabernet Sauvignon.

Although orecchiette con cime di rapa is the most well-known method for preparing this type of pasta, orecchiette’s versatility makes it easy to dress up or down with a variety of ingredients. One popular variation from Salento, for example, includes a sauce of fresh tomatoes and ricotta cheese that can be accompanied with or without meatballs. Other common pairings include pancetta, mushrooms, or other seasonal vegetables.

Like many pastas from Italy, orecchiette also goes by different names depending on where you are in the country. Common names this popular pasta goes by include recchietedde and chiancaredde. And, much like its name, the size of orecchiette varies from place to place, too. In Lecce and Salento, for example, orecchiette is larger in size than it is to the north in Bari. 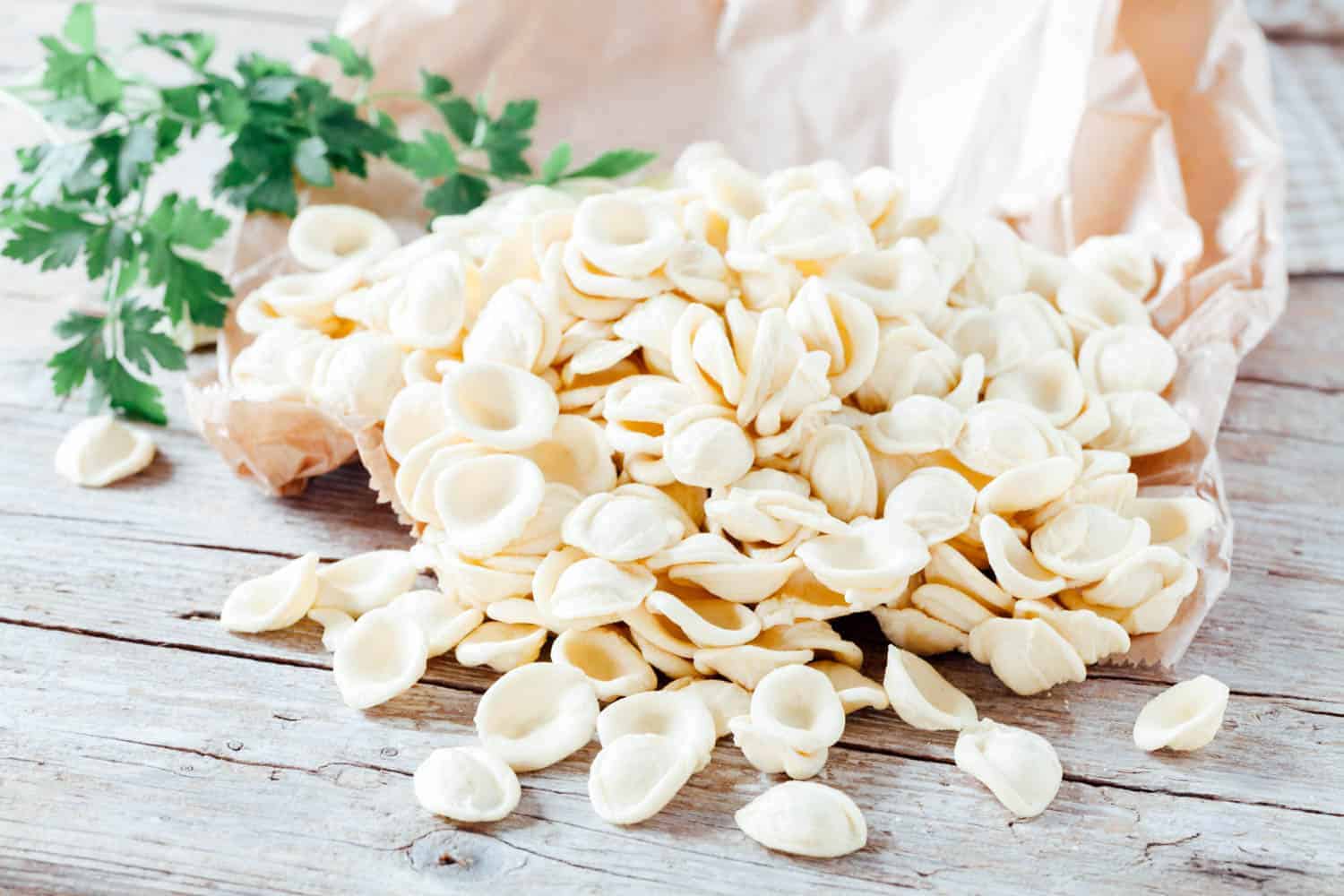 Fresh orecchiette can easily be made at home with just a few simple ingredients.

With its deep-rooted history in the region, use of simple ingredients, and its convenient versatility, orecchiette has become a defining part not only of Puglia’s cuisine, but its culture, as well. And its popularity extends far beyond the region of Puglia. Today, orecchiette — once regarded as a peasant food — has become one of Italy’s most popular pasta varieties.

Even if you don’t have plans of visiting Puglia in the near future, you can enjoy fresh, authentic orecchiette in the comfort of your home thanks to its simplicity. All you need is some flour, water, and a little bit of patience. For step-by-step instructions on how to make orecchiette at home, we recommend this easy-to-follow recipe with pictures from Fine Cooking.