Spain’s Catalonia region is known for its melting pot of a cuisine, which makes good use of the fruits of the land, sea, and mountains, and draws culinary inspiration from surrounding regions. There’s a distinct Mediterranean flare to Catalan flavors: tomatoes, artichokes, olive oils, sardines, anchovies, and more. But even though it’s sometimes grouped within western Mediterranean cooking, Catalan gastronomy — much like its language — is entirely its own and breaks many of what would be considered hard and fast rules in other cuisines, like mixing seafood and meat (a tradition called mar i muntanya), as well as combining sweet and savory flavors.

While Catalan cuisine also shares many features with traditional Spanish cooking, it varies here, too. One example is pork sausage. A staple of the region, sausages from Catalonia typically aren’t seasoned with paprika like the famous Spanish chorizo. For this reason, Catalan cuisine can be considered a bit rebellious.

Within Catalonia’s four provinces and hundreds of cities, Barcelona is the place to start when embarking on a food adventure, due to its innovative and progressive nature and excess of restaurants and markets. Read on to learn how Barcelona’s culinary scene and markets are putting the focus back on organic ingredients, and discover four of our favorite Barcelona markets worth visiting. 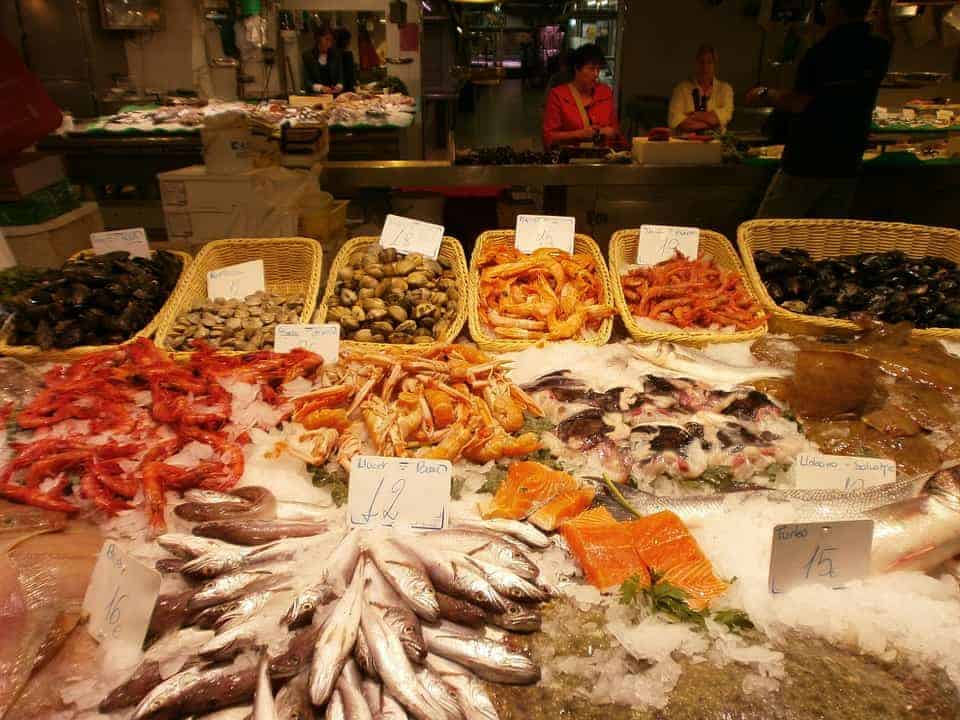 Fresh seafood is always in abundance at Barcelona markets.

The second largest city in Spain and home to 1.6 million, Barcelona is dense with Michelin-starred eateries, speciality dishes, gourmet innovations, and rising chef stars within the city’s culinary scene. Previously known for an atmosphere of high-class, experiential dining, the current dining scene in Barcelona has been shifting toward a slightly more casual experience with lower prices. Don’t worry though, you can expect just as much quality and innovation. The shift has been seen as a way to focus on the plate more than anything else.

In Barcelona, you can find traditional tapas restaurants offering small bites at the counter, three Michelin-star restaurants (like ABAC and Lasarte), eateries that offer a mixture of Catalan traditional cooking fused with other global cuisines, and even restaurants running culinary academies and others with speciality focuses like raw seafood at Espai Kru.

Due to all this variety, you may wonder what exactly is the through line connecting all this culinary creativity? The answer: access to quality ingredients through the renaissance of markets.

Markets Around Every Corner

While markets in Barcelona have a history dating back two thousand years, the modern tradition of food stalls and fresh markets held within permanent buildings goes back to the middle of the 20th century. It’s a tradition that was nearly lost, but has now returned with enthusiasm. Like in much of the rest of the world, supermarkets and superstores emerged in and around Barcelona and continued to multiply due to their lower prices and general convenience. What was lost, however, was access to high-quality, local ingredients and a sense of community.

All that changed at the beginning of the 21st century when Spanish citizens started wanting access to organic produce again. Their government listened and dedicated more land to organic farming than any other country in the European Union. Around this time, the city of Barcelona began renovating and refurbishing its abandoned market buildings and stalls for use again. Today, there are 39 food and four non-food markets in Barcelona. With so many to choose from, we thought we’d share details about four of our favorites. 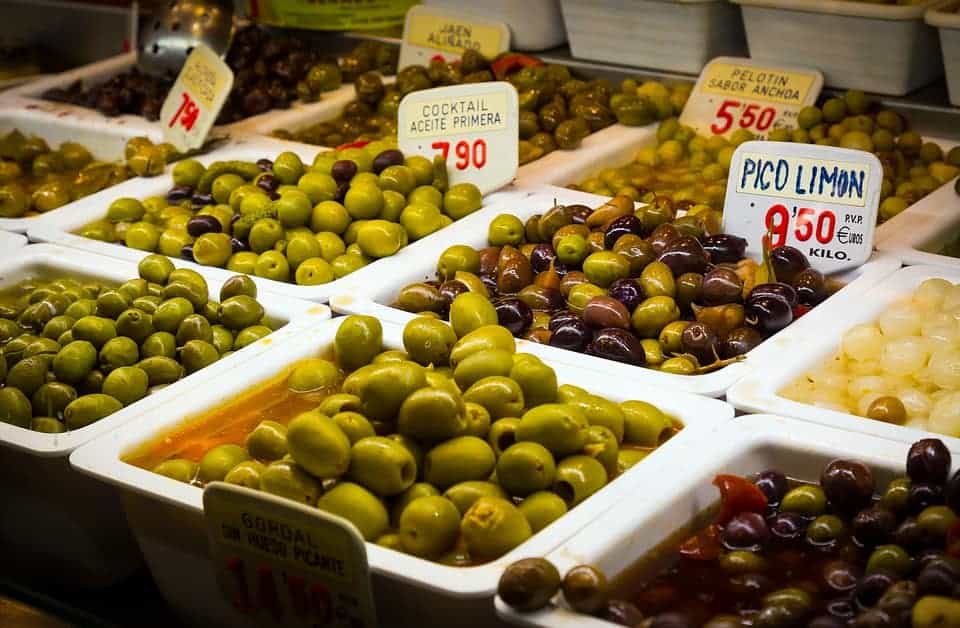 Fresh olives marinating in oil is a favorite at the market.

We’ll start with a market as architecturally beautiful as its offerings are delicious. The Mercat de Santa Caterina can be found in the Ciutat Vella district, and it won’t be difficult for you to spot this gem. Architects Enric Miralles and Benedetta Tagliabue remodeled this market in 2005 and topped it with a distinct, waving roof of multi-colored ceramic tiles. It’s quite the update for a historic building, which was first opened in 1848 with the added distinction of being the city’s first covered market. Among the stalls, you’ll find produce, flowers, fresh seafood, butchers showcasing local specialities like Jabugo ham, and more. There’s also a small tapas spot and a full restaurant called Cuines Santa-Caterina, all within the same building.

When visiting Barcelona, you’ll have plenty of opportunities to stroll through Mercat de Santa Caterina, as it’s open every day of the week from 7:30 a.m. to 3:30 p.m., and with extended hours on Tuesday, Thursday, and Friday until 8:30 p.m.

Mercat de Sant Antoni was the first of Barcelona’s markets to be constructed beyond the limit of the medieval walls and was designed by famous architect Ildefons Cerda. Like Mercat de Santa Caterina, this market recently went through an extensive renovation project, refurbishing the historic 1872 building with an astonishing eighty million Euro budget. The impressive renovation took nine years to complete, and the final product was just revealed in May of this year with celebrations and events including live poetry, music, and dance performances.

But what makes this market so notable is that it’s actually three-in-one. The main food market is comprised of 52 stalls, but there’s also the Encants, which is a market for clothes and flea market finds. Additionally, visitors can experience Sant Antoni’s 78-stall, open-air, Sunday market. It’s truly a one stop shop to taste local specialities, chat with merchants, people watch, and pick up souvenirs to bring home. 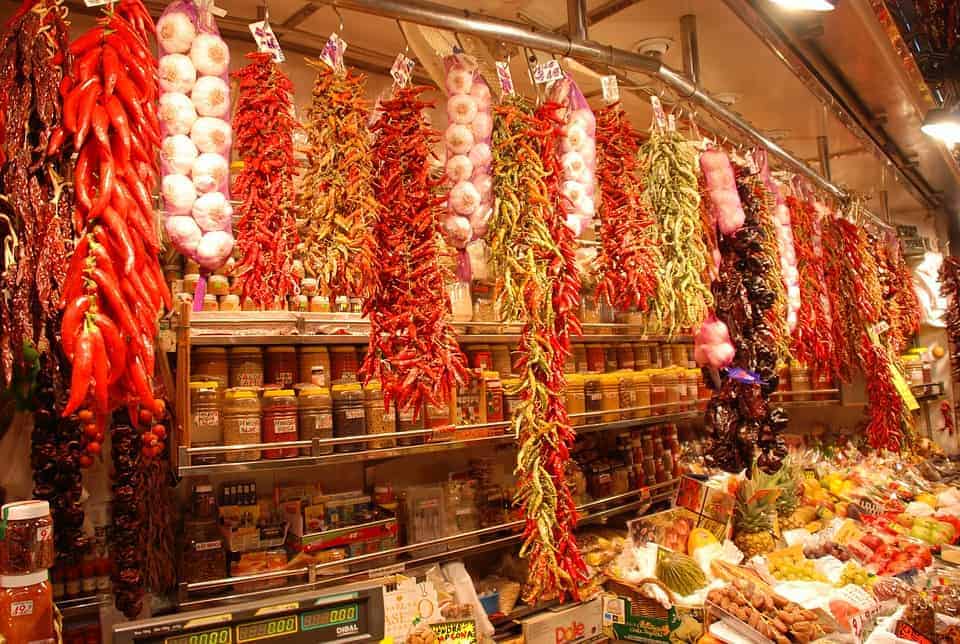 Any list of Barcelona’s best markets would be incomplete without the most famous of all: Mercat de Sant Josep de la Boqueria. Usually abbreviated to La Boqueria, this market brings huge crowds of people and is nearly as iconic as some of the city’s other destinations like the Sagrada Família or the Catedral de Barcelona. La Boqueria is also located in the Ciutat Vella district like the Mercat de Santa Caterina, and although it wasn’t officially named and recognized until 1826, markets of various sorts were found on the same spot since the thirteenth century.

Today, visitors of the market can explore La Boqueria’s more than 300 stalls, which specialize in everything from legumes, to poultry and eggs, to olives and tinned foods, to salt fishing, and more. Market-goers also can take part in frequent events and cooking classes offered in the Boqueria Classroom. 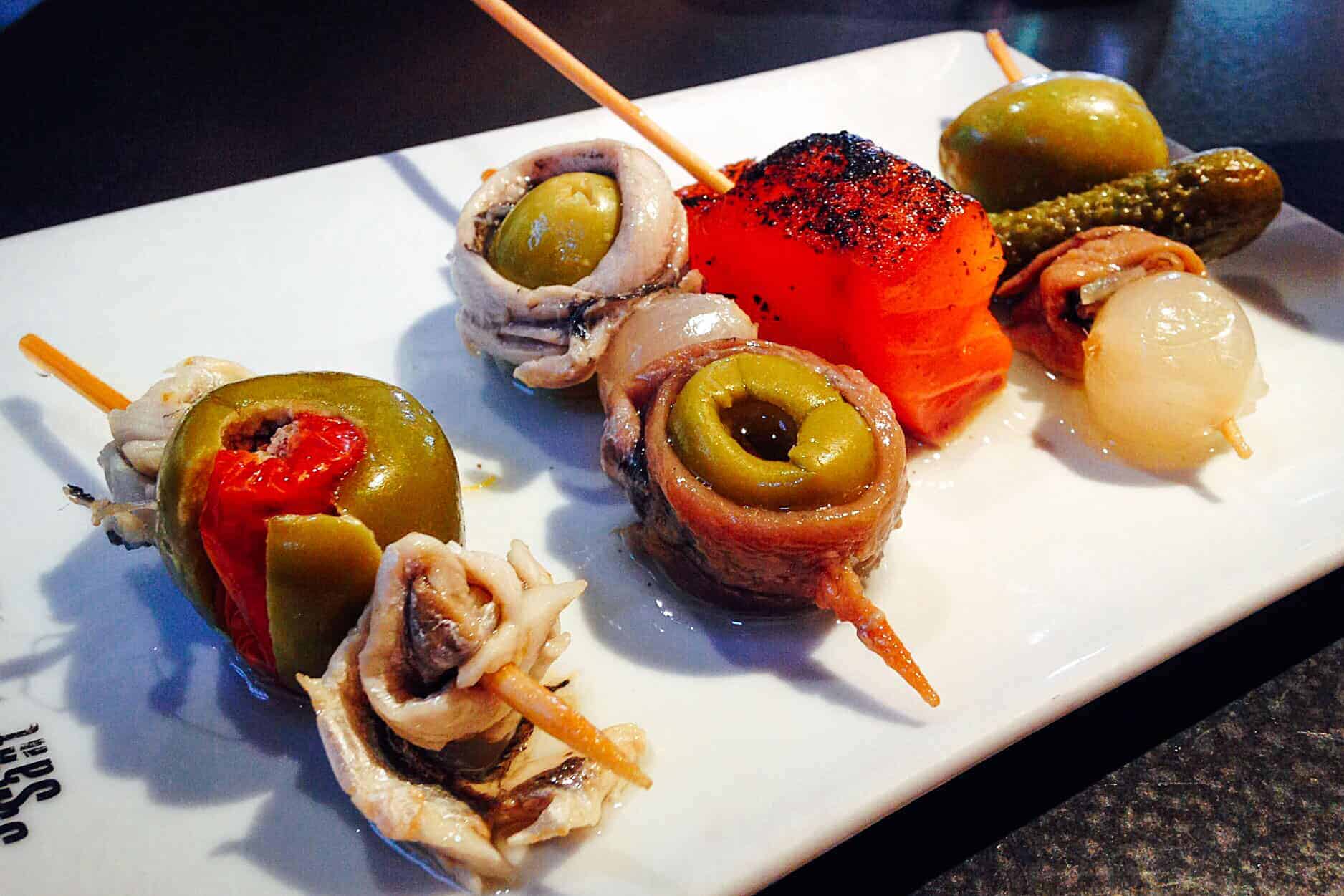 Sate your hunger with tapas at one of the many restaurants found within the markets.

Meaning “Market of the Child,” Mercat Del Ninot is another refurbished market, which opened its new doors in 2015. The modern and much larger space is decked out in glass and steel with high ceilings that make the space feel almost cathedral-like. This market it considered to be one of the higher-scale and less-touristed spots to pick up unusual or true speciality dishes and ingredients, like kokotxas, which are cod cheeks.

Among the stalls selling local breads, cheeses, fruits and vegetables, cured meats, and seafood, you’ll also find tapas bars and restaurants like Res, where you can nibble on some croquetas de jamón or ham croquettes.