To truly get to know any destination, we think you should absolutely savor as much food and wine as you can, take in the local architecture, and immerse yourself in the landscape, whether its blooming lavender fields or coastal shores. But why not learn a local game as well?

In Provence, one of France’s most popular and organically chic regions, we’ve been practicing the game of Petanque (and getting pretty good at it). This sociable boule game is somewhat like British lawn bowling and a bit like the Italian game of Bocce, yet it has its very own quirks and rules, as well as an interesting history.

From ancient games to Jeu Provençal to Petanque

Boule games have been played since ancient times. This is a category of games that includes any variation where the objective is to throw a large ball toward a smaller ball that is the target. While records exist from the sixthth century BC of people playing boule-like games in ancient Greece (throwing stone balls called spheristics toward coins), other stone balls have been found in Turkey dating back to 9,000 BC. Boule games may also have been played in ancient Egypt. The main takeaway: people like this style of game and have for a long, long time. 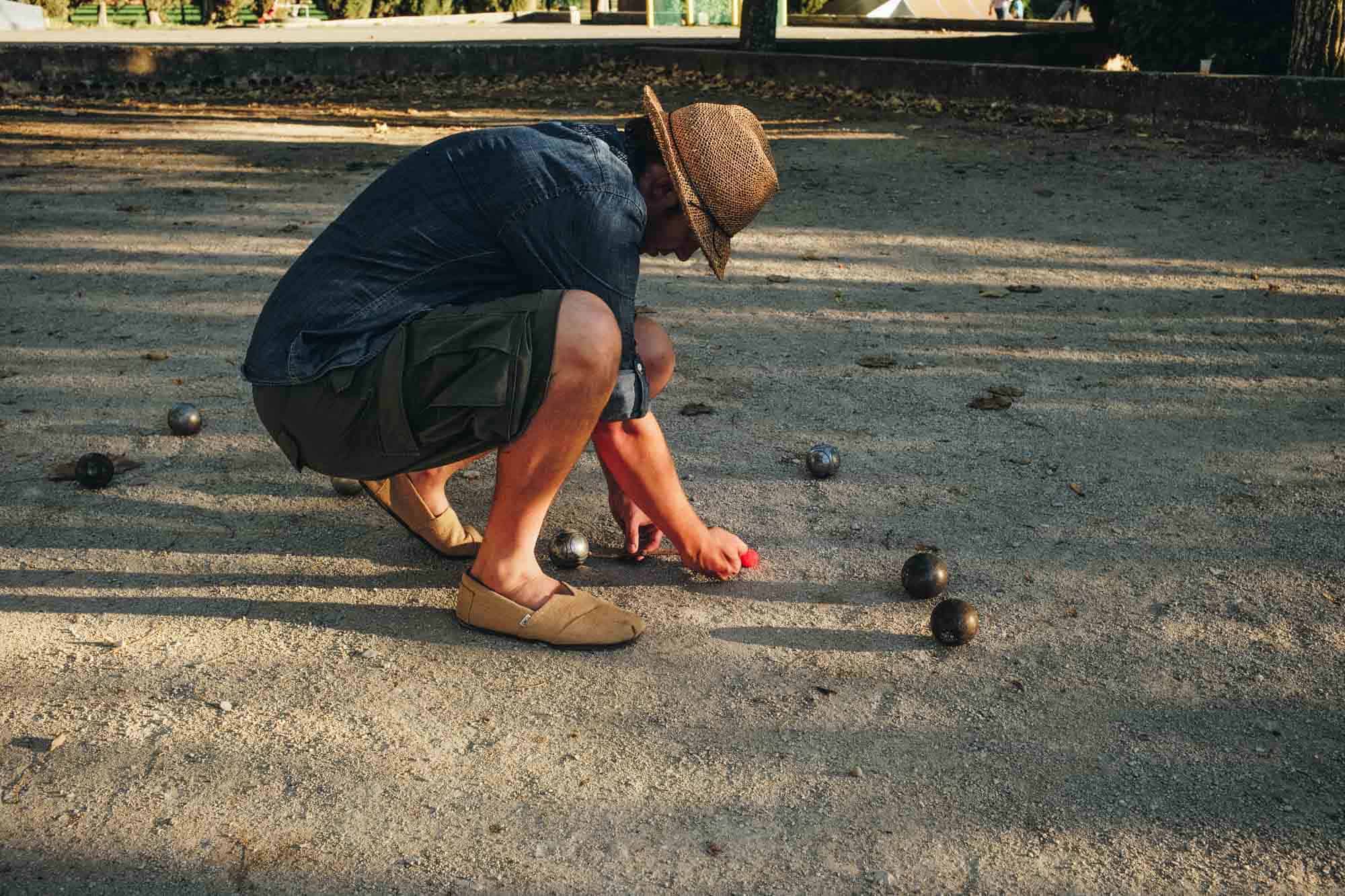 In France, Petanque is actually derived from another boule-game variant called Jeu Provençal (also called boule lyonnaise) that was popular during the second half of the 19th century. Jeu Provençal involved running three steps before throwing the shooting ball. Around 1910,  Petanque emerged as an alternative to the standard Jeu Provençal for a very specific reason. In the town of La Ciotat, a cafe owner named Ernest Pitiot came up with some new rules in order to accommodate his friend, Jules Lenoir, who loved the game but was having difficulty playing due to his painful rheumatism. In Pitiot’s rules, players were not allowed to run before throwing their ball, but instead had to stand within a circle with their feet planted on the ground. Pitiot also decreased the length of the game field by half, reducing the effort needed to play. First called “pieds tanqués,” meaning “feet planted,” the game eventually came to be known as the shortened Petanque. Within the town of La Ciotat, the local museum Le Musée Ciotaden documents the wonderful history of this cherished game.

How to play Petanque

Chances are you’ve played a game similar to Petanque, whether it’s Bocce or even horseshoes, but this Provencal game has its own subtleties. The objective of the game is to gain points for your team by throwing metal balls toward a smaller target ball, all while standing stationary within a circle. The closer your team makes it to the target, the higher your points.

The game is played with two competing teams, each having one, two, or three players. The first player will begin the game by throwing the cochonnet, which is a smaller wooden ball that is used as the target. That player will then take their turn at throwing their first of three boules (a larger, metal ball) toward the target. As other players take their turns, they generally have three strategy options: aim their boule closer to the cochonnet, knock the opponents’ boules further away from the cochonnet, or knock the cochonnet away from the opponents’ boules. The players continue until all the boules have been thrown and the first round, called a mène, is scored. Whoever reaches 13 points first wins!

Along with a seemingly endless layer of extra rules and strategies, the game of Petanque also has its own lingo. These are just a few of our favorite terms and phrases.

Une portée: The French word for when a player lobs the boule in a high arc so that it falls from the sky nearly vertically, resulting in little rolling on the ground.

Carambolage: Meaning “pile-up” in French, this is when a throw is so powerful it knocks several opponents’ boules out of the way.

How to experience Petanque for yourself

Today, Petanque is one of the most popular games played in France, and it has spread internationally. In total, 10 to 12 million people across 160 countries enjoy it. Traditionally, Petanque is played outdoors in parks on special gravel or hard dirt courts, but there are now many indoor Petanque courts called boulodromes scattered throughout the region of Provence, France, and even throughout the world.

You may be able to learn the game in your own city, but there’s nothing like trying your hand at Petanque in the region where it was invented and where it is so loved. When we bring travelers to Provence, we let them learn the game firsthand during a private court session, complete with an after-game aperitif of anise-flavored Pastis. You couldn’t ask for a more enjoyable way to pass the afternoon.