Puglia: It’s the heel of Italy’s boot. A lesser-known, sunny region and a growing wine destination (think dark, rustic Primitivo). It’s the birthplace of orecchiette pasta. And, of course, Puglia is also home to the famed trulli buildings.

We’ve already covered a lot about the Apulian food and wine scene in some of our past features. From “5 Experiences in Puglia for Food and Wine Lovers,” to “A Taste of Puglia: Orecchiette,” to “5 Puglia Wines We Love,” there’s plenty to get your taste buds ready for this region. But! We can’t talk about Puglia without also discussing the iconic (and conical) white-washed trulli buildings that so many people travel across the world to see.

While you may have seen photos of these famed structures before, you may have guessed they were from Greece. In actuality, the trulli are unique to Puglia. Read on to learn more about their uncommon structure and some theories about why early Italians constructed their houses in this very special way.

What are the famed trulli? 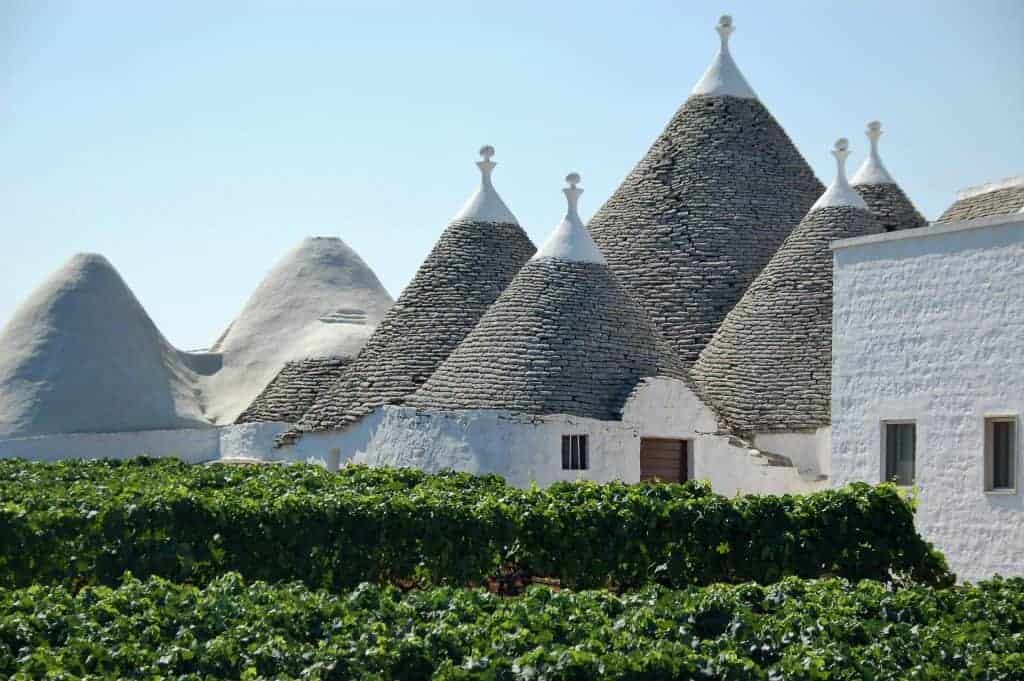 Trulli are known for their unconventional shape, but also for the limited materials required to make them. The trulli are entirely composed of stone, including their cylindrical (sometimes square) bases and conical roofs. Unlike most brick or stone buildings, traditional trulli require no mortar between the stones to hold the structure together (known as dry stone masonry). In the trulli, cylindrical and conical architectural shapes mean lateral opposition and gravity hold the stones in place. These special buildings rely only on their shape for structural integrity.

Some trulli houses that are still standing date back to the 14th century. And while these structures are scattered all throughout the Itria Valley in Southern Italy’s Puglia region, the highest concentration of trulli are found in the town of Alberobello. There are more than 1,500 trulli in Alberobello, specifically in the Rione Monti and Aja Piccola quarters.

While materials like wood were harder to come by in Puglia, there is plenty of stone. This is why most of the trulli are made from either local hard limestone or calcareous tufa. It’s believed these types of buildings go back for thousands of years, with the general idea of their structure coming from the Stone Age. And while a single building is called a trullo, you’ll mostly hear them called trulli as they were most often built in groupings or clusters. If built in the countryside, where there was more room for a wider floor plan, the trulli were sometimes created in connected clusters of one or two dozen to meet the demands of a large, rural family. In these larger groupings, each trulli represented a single room within a larger house.

But why were these structures made here? The most popular (and perhaps sneakiest) theory relates to historical property tax laws. The theory goes that high taxation in the 17th century led to Apulian people building houses that could be easily dismantled and rebuilt in new locations to avoid tax inspectors.

Iconic Aspects of the trulli 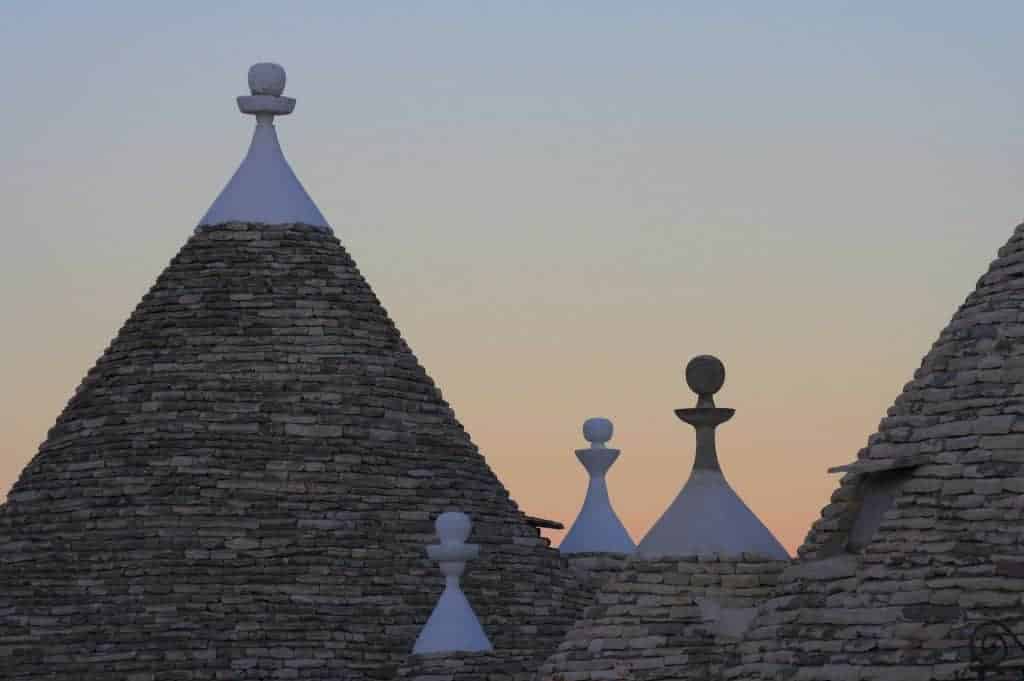 Perhaps the most fascinating part of trulli construction are the different ways stones are utilized. But the decoration of the buildings is also noteworthy, whether entirely whitewashed, or adorned with traditional symbols. Here are some of the key things to look for when exploring the trulli.

Trulli roofs are made up of two distinct layers of stones, called “skins.” The inner skin (or “chianche”) is comprised of stone voussoirs that are wedge-shaped and are typically used when constructing arches. The outer skin (or “chiancarelle”) is made up of another layer of stones, but these are placed so that they tilt outward, guaranteeing a watertight roof.

The pinnacles that sit atop the trulli roofs are truly a display of individuality and style. Most commonly seen on the trulli in the town of Alberobello, these hand-carved stone pinnacles can sometimes resemble chess pieces. Designs include stone balls, cones, disks, and other shapes, stacked on top of one another into a unique final design. While mostly ornamental, it’s also believed the pinnacles could deter evil forces.

While most trulli have whitewashed bases, some, especially in Alberobello, display whitewashed symbols on their roofs. Many of these symbols feature Christian iconography, such as crosses or a cross within a heart struck by an arrow.

How to experience the trulli today? 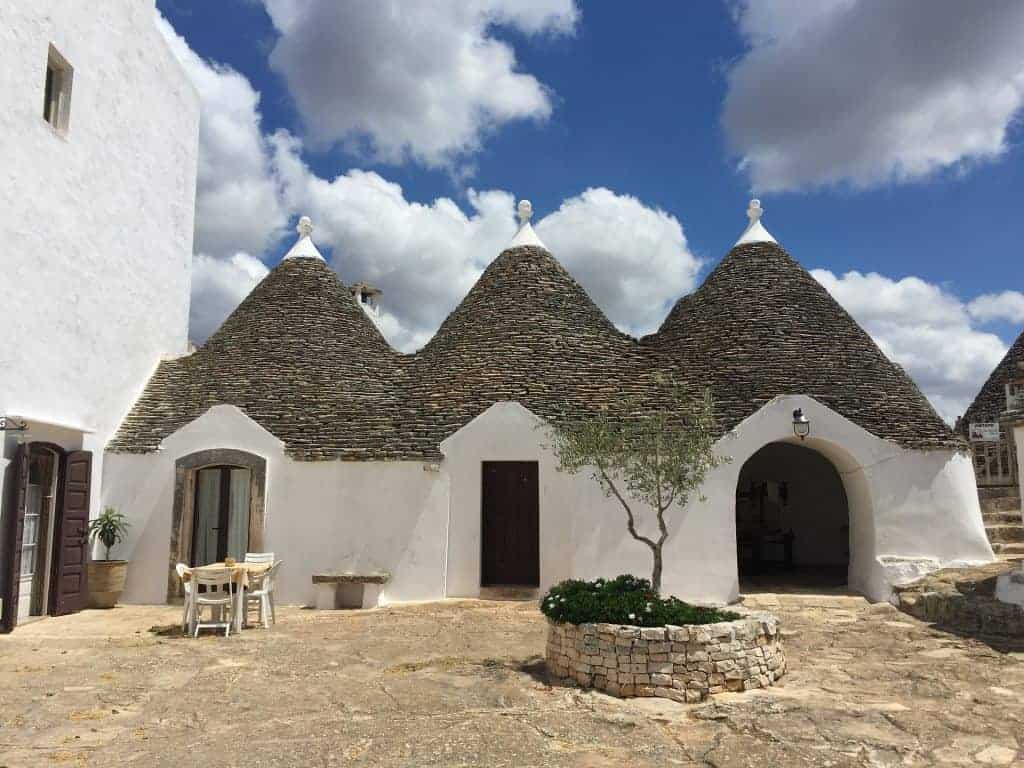 Today, there are many laws protecting the remaining trulli, which is amazing for travelers looking to experience a true piece of the past. All trulli are protected by UNESCO World Heritage law, and the trulli in the town of Alberobello have been grouped together as a UNESCO World Heritage site for over 20 years, since 1996. These protections ensure that when trulli are converted into private housing or hotels, the owners must adhere to strict preservation regulations.

But, you heard us right. Many of these trulli are now boutique hotels. You can experience a night in one yourself, or just tour them during the day as you wander the city of Alberobello. With its many hundreds of whitewashed, stone huts, Alberobello has one of the most unique skylines and is a pedestrian’s dream. So take a tour of one of the trulli, look up at the conical roofs and picture the history of the stone masons whose hands created those structures, then head to a local eatery down the road and savor fresh orecchiette with pesto. What a delight!